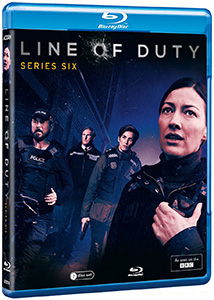 Please see my previous reviews of all 5 series of Line of Duty for background up to this new series.

Possibly one of the best TV series around, this much needed and looked forward to series 6 of Line of Duty was essential viewing a few weeks ago on a Sunday night. Either you were in, or you were OUT. Because this was going to be the big one, we were finally going to find out who ‘H’ was.

This is a 6 series long story, so intertwined and detailed that despite watching them all (at least twice) I still have to watch YouTube catch-ups to remind me who is who and who is dead etc.

The eternal triptych of Martin Compston as Steve Arnott, Vicky McClure as DI Kate Fleming and Adrian Dunbar as Superintendent Ted Hastings are joined by Kelly MacDonald, joining the cast as Detective Chief inspector Joanne Davidson, who is investigating the murder of Gail Vella, a journalist who was looking into police corruption.

In past reviews of LOD I’ve talked at length about the intricate, excellent writing of Jed Mercurio, the great acting and the sets, but I think the main pull of this series is its ability to keep you at the edge of your seat and wanting more while not wanting it to end.

Series 6 is no different. It is thoroughly gripping. Also the thought of it building up to the big reveal was thrilling. However around episode 5 (of 7) a niggling doubt started in my mind. Were they actually going to reveal who H was? As they kept showing photos of a bent policeman (James Nesbitt) now living in spain who never appeared in any episodes and gets murdered (or does he?). It seemed obvious flashing pics of Nesbitt meant that he was going to be the star of series 7, was he in fact ‘H’?

When the reveal finally came it was a huge disappointment. Much like the end of Game of Thrones, where they galloped to the end and gave us…. Not the massive bang we all needed. It was more of a wet fart.

Unfortunately this does distract from the rest of the story. Davidson was another cop planted by Tommy Robinson, who was not only her uncle, but her incestuous dad. Nope… H, it’s always been about H, and we were given a dud.

I’d like to think it was on purpose and not that Jed ran out of ideas. I want to believe that there will be one last series, where we will get the GASP we all longed for.

I used to live in Los Angeles and write about Rock bands. Now I live in wonderful Wales and write about films. I like video games (especially RDR2) and am also a painter...gratuitous plug: follow my art account on Instagram @artbytinar
Review: Shock Wave – Hong Kong Destruction Review: Duel