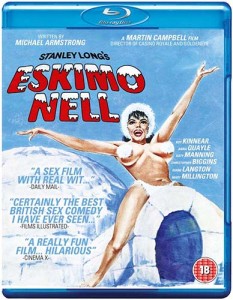 A scriptwriter, a producer and a director (Michael Armstrong, Christopher Timothy and Terence Edmond) are persuaded to make a sex comedy film of the ‘poem’ Eskimo Nell by a dodgy Roy Kinnear. However, each of the three main backers wants their own leading lady (and man) in the role of Nell and expects a different type of movie: a gay cowboy version, an erotic story and an opera/kung-fu story. Kinnear runs off with the backers money leaving our 3 hapless heroes to make three different versions of the same film and try not to let the backers and stars know what has happened.

I think in order to give ‘Eskimo Nell‘ the review it deserves, you need to be of a ‘certain age’ and by that I mean the age where you can remember your dad buying ‘Titbits’ Magazine (yes TITbits, not tidbits), an age where ‘Love Thy Neighbour’ was at the top of the TV charts, females were called ‘birds’, and breasts were funny. I also think you have to be able to view it in a contemporary mode, and NOT be offended by what’s onscreen, because anyone unfamiliar with 1970’s Britain would, I think, struggle with this film at first.

I admit I’d never seen ‘Eskimo Nell’ before 88 Films 40th anniversary release, and was expecting some sort of cross between a ‘Carry On’ and a ‘Confessions’ film. I was wrong. Firstly you have to realise that at the time this film was made, BIG box office takers in the UK included sex comedies such as the ‘Confessions’ films, ‘Secrets of a Super Stud‘ and ‘Can You Keep It Up for a Week?‘ etc. So they were the norm, films that now are so un-PC and “groan worthy”, were not only accepted but also blockbusters at the UK cinema. So please bear in mind the climate of when this film was made, and only then can you begin to see just what this film is. To say it has a plethora of British talent is an understatement, every face is recognisable, even the director (Martin Campbell) went on to give us ‘Edge of Darkness‘, oh and one of the best Bond’s; ‘GoldenEye‘, so the pedigree of the film is impeccable.

I suppose for a modern audience, the question is, is it satire? And if I was watching in in 1975 I’d think it was a more ‘highbrow’ sex comedy and satire, rather than a straight up ‘shagathon’. It doesn’t shy away from rudeness; there are so many ‘tits’,‘screwings’ and ‘muffs’ (one muff being Mary Millington’s) and full on sex (one part reveals a woman sitting with her fanny over a man’s face while they audition for the film) which shows how we really were more liberated and less prudish 40 years ago.

So the film itself; I found it to be quite inoffensive and laughed, but I do think a younger audience would struggle with the humour. It’s quite harmless, one of the main jokes is the poem the film is based on is recited a few times always stopping short of saying the word ‘c**t’. I didn’t find it erotic, though again, a contemporary audience may have. It did smack of that old Benny Hill type tits and arse British humour that only the British can do (and ‘get’) and I admit that it was a real nostalgia view for me, and although I don’t think I’d really re-watch the film on its own, I would re-watch with the wonderful commentary again.

This is one of the best commentaries I’ve ever heard on a film (and I’ve heard a LOT). Writer and star of ‘Eskimo Nell’ Michael Armstrong and writer/historian Simon Sheridan do an extremely enlightening and entertaining review of the film. Michael is so charming and just makes the story behind the film come alive and is enabled beautifully by Simon who obviously knows his stuff (he’s written several books on the subject). Please take 5 minutes to look at their websites as they are so interesting!

All in all, a really significant addition to any real film fan who is into British film collection. A really surprising, and I think important film that truly reflects the time it was made, not only through the clothes and sets and REAL locations, but also the mindset of the population at that time.

A cracking Release from 88 Films

Review by Tina from a disc kindly supplied by 88 Films.

I used to live in Los Angeles and write about Rock bands. Now I live in wonderful Wales and write about films. I like video games (especially RDR2) and am also a painter...gratuitous plug: follow my art account on Instagram @artbytinar
Review: The Island of Dr. Moreau Review: The Story of the Sinclair ZX Spectrum in Pixels Volume 1