Review: The Story of the Sinclair ZX Spectrum in Pixels Volume 1 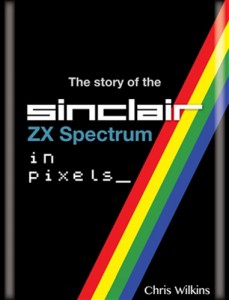 As great as modern gaming is there are often a number of phrases and terms that get thrown around like confetti, which you unfortunately have to contend with. There are countless articles and discussion about frames rates, microtransactions, day one patches and does a game run at 1080p? It sometimes feels like we are taking the ‘P’ wanting to know how many P’s a game runs at!  In our house, in 1985, taxes and whether the picture was hanging straight on the wall was about as close as you got to frames and rates. Microtransactions were something you did at the local shop for one penny sweets and day one patches were something that your mom sewed on to a jacket, so this is why I absolutely love ‘The Story of the Sinclair ZX Spectrum in Pixels Volume 1‘ by Chris Wilkins.

I’ll admit now that I was a “Speccy” child. My friend had a Commodore 64 which was nice and shiny but my love for all things Spectrum started at an early age.  I still remember when my dad came home with a Spectrum 48+, a tape recorder, a mini printer with shiny silver paper and a mini portable Sinclair branded TV.  The man at the electronic shop must have seen him coming and he earned his bonus that particular day based on how much stuff he sold my dad.  I still distinctly remember sitting down at 8 years old playing ‘Hungry Horace‘ for the first time and being amazed! My dad also came home with ‘Beach Head‘ and ‘Return of the Jedi: Death Star Battle‘ and so began my love for video games, or computer games as they were then known.

The ZX Spectrum was such an important part of my childhood so I was thrilled reading ‘The Story of the Sinclair ZX Spectrum in Pixels Volume 1’, as it brought back so many memories of a simpler time in my life when imagination meant something and there was no cynicism surrounding the games industry like there is today.  Everything seemed brand new and fun.  It’s clear from reading the book that Chris Wilkins has a lot of love for the ZX Spectrum.  He explains in the foreword how the ZX Spectrum formed an important part of his childhood and how it shaped his life and career.  A lot of love and affection has gone into producing not only an interesting book interviewing various people who were influential to the success of the Spectrum, but also delving into one of the most important factors of the Speccy; the games.  A large section of the book is taken up with showing off screenshots and box art of the games, a history of the game and what made them special. This is probably my favourite part of the book and I find myself saying “oh my god, I remember loving that game!”  The memoirs section of the book features gaming royalty such as Jon Ritman, Philip & Andrew Oliver, Ste Pickford and many more reminiscing about their start and experiences in the games industry.

This book is an absolute must for fans of the ZX Spectrum or indeed fans of video games in general.  I can honestly say I had goosebumps reading this book and it will take you on an unforgettable trip down memory lane.

For full disclosure I won this book in a competition on the ‘Retro Gaming Daily Show‘ podcast. However; based on the quality of the book I have since ordered ‘The History of Ocean Software‘ and wait with baited breath for forthcoming books; ‘The History of U.S. Gold‘ and Volume 2 of ‘The Story of the Sinclair ZX Spectrum in Pixels‘ when they are due for release later this year.

‘The Story of the Sinclair ZX Spectrum in Pixels Volume 1’ by Chris Wilkins can be purchased at Fusionretrobooks.com

I love video games and movies as much as I love my children. However, I'd rather face off against the worst end of level boss, and watch the scariest horror movie than visit another soft play! Thanks for taking the time to visit the website and read this review. Please send any complaints to Dave and any money to me!
Review: Eskimo Nell Review: Everly