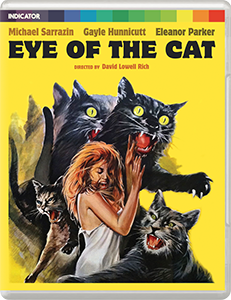 However, their plans begin to unravel when Wylie’s phobia of cats is put to the test in Danny’s feline filled house, also not helped by mistrust and misunderstandings between all involved.

Eye of the Cat is very much a film of its time, with a sixties wardrobe courtesy of legendary costume designer Edith Head, accompanied by a great score by Lalo Schifrin (Dirty Harry).

The dialogue is stilted at times and there are plot holes to ignore, but on the whole it delivers an enjoyably camp horror/mystery/thriller with some great overacted scenes…including my particular favourite involving Aunt Danny in her wheelchair at the top of a very steep San Francisco hill.

Animal lovers may well get upset at a couple of scenes involving the way the cats were treated, but some of the main concerns about this are addressed in the very informative special features.

No real scares, but more than made up for with its high entertainment value, Eye of the Cat is definitely a film to add to your “must watch/buy” list.