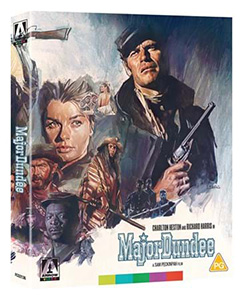 Regular readers will know my favourite genre is the Western and I admit to feeling quite ashamed that I had never seen Major Dundee before this glorious 4k scan Arrow Films release. What a beautiful package it is, from the packaging to the film.

During the Minnesota Dakota Indian War of 1862, Union forces in that state were made to recruit Confederate prisoners from Texas to make up their numbers to fight the indigenous Indians, unlike the film, the Union and Confederate soldiers hated each other.

In Major Dundee, Charlton Heston plays Major Amos Dundee with a square jawed mastery. He is the commander of  prisoner-of-war camp in New Mexico. On hearing that a local family have been butchered by the Apache he decides to pursue them, and to boost his numbers recruits his once friend (who fights for the South) Ben Tyreen (Richard Harris, who interestingly couldn’t ride a horse).

He sends his one armed scout out (James Coburn) to look for the Apache while he builds an army.

A ragtag bunch of  soldiers chase the Apache around Mexico and the border and on the way they get help from Teresa Santiago (Senta Berger), the Austrian widow of a doctor executed for his support of the rebels under Benito Juárez. This causes problems as Both Tyreen and Dundee fancy her.

Critics of the film have taken pains to point out the similarities between this story and Herman Melville’s great American novel Moby Dick. Many of the characters are similar to those in the book, with Dundee as Captain Ahab, Tyreen as Starbuck, and the Apache as the whale, as is the plot of the story, an obsessive idealist drives himself to destruction, disregarding the effects on others.

Peckinpah apparently changed the story into what it is, and taking the original emphasis off the narrator character, the bugler Trooper Ryan (played by Brit Michael Anderson), and concentrating on the slightly unhinged Dundee.

And there lies the problem. Heston is incapable of playing unhinged, he is everything an American hero should be, and although I do love Heston, he was wrong for the part. He is too much the hero, when Peckinpah needed someone a bit dirty, maybe a William Holden or a Henry Fonda.

The production of the movie was also troubled. Peckinpah up to his usual pissed antics and at one point was threatened with a sabre by Heston. Good times.

The studio feared that the project was out of control, and that Peckinpah was too unstable to finish the picture, so they cut the shooting schedule of the film by several weeks. Heston gave up his whole salary for the film in order to keep Peckinpah on the project, likely a gesture Peckinpah appreciated, it didn’t make any difference, and the director was so drunk towards the end, Heston himself started to direct the film in order to get it finished.

Apparently the original cut of the film was 4 hours 38 minutes long, which was initially edited down to 156 minutes. Included in this unseen version were several slow-motion battle scenes inspired by Akira Kurosawa’s Seven Samurai.  At the film’s release in 1965 it was 136 minutes long, and after a disastrous premiere,  the movie hated by critics, another thirteen minutes were cut out, creating a very confusing storyline.

In 2005 Film Forum premiered this restored version of the film, along with a new musical score by Christopher Caliendo. Restored scenes are listed below. These include both brief inserts and additions to existing scenes, as well as four major scenes restored to the film.

I suppose knowing the history behind the making of this very troubled film makes it more enticing, but watching the film for it’s own sake, well… it’s not a classic western. It’s overlong and confusing in places. Several actors are miscast and in truth, I’d like to see a film about the making of Major Dundee.

Despite the film being a bit of a tedious watch (due to all the cutting) the package itself is so worth it, the extras go beyond brilliant, and reminisces about Peckinpah are unmissable.

I used to live in Los Angeles and write about Rock bands. Now I live in wonderful Wales and write about films. I like video games (especially RDR2) and am also a painter...gratuitous plug: follow my art account on Instagram @artbytinar
DORO to release ‘Triumph And Agony Live’ Review: Eye of the Cat