Review: Flight of the Navigator 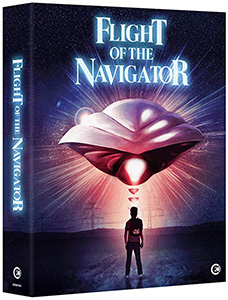 A real classic from 1986, Flight of the Navigator is still a firm favourite with all kids from the 80s, me included.

Directed by Randal Kleiser and written by Mark H. Baker, Michael Burton and Matt MacManus, it tells the story of 12 year old  David Freeman (Joey Cramer) who falls down a ravine while walking through the woods to pick up his younger brother, Jeff.

He wakes up, and its 8 years later.

The toll of David’s loss is visible on his parents, and his once younger brother, is now his older brother.

David is taken to NASA where his brainwaves reveal images of all sorts of Star Trek-like space technical data that David has no idea about.  The data reveals that he was taken to a planet called Phaelon, 560 light years away.

David escapes with the help of a very young Sarah Jessica Parker, and following a telepathic communications in his head, David boards possibly one of the best space ships ever to appear on screen.

The ships computer, voiced by Paul Reubens (Peewee Herman) tells David that his mission was to travel across the galaxy, collect biological specimens, take them to Phaelon for analysis, and then return them to their homes.

Phaelon’s scientists discovered humans only use 10% of their brain and, as an experiment, filled the remainder of David’s with miscellaneous information.

This includes all of the star charts discovered by Phaelon’s astronomers. Max then returned him to Earth, but didn’t take him back to his own time thinking that David would not survive the journey.

Before leaving Earth, Max crashes and for him to return home, he needs the info stored in David’s brain.

A lot of films of this ilk came out in the 80s, but what sets Flight of the Navigator apart and makes it so memorable and good, is pathos. The acting is wonderful and Joey Kramer as David gives a very emotive and realistically ‘lost and confused’ performance, the same with Matt Adler as big/little brother Jeff.

The feeling of loss for a Disney film is palpable, and even after all these years and knowing the film really well, I still fill up when David goes to his old house looking for his mum and dad.

Second Sight have put together a great package of all new extras, in depth interesting interviews with the stars and director, and the transfer itself is glorious.

This really does deserve the status of a classic. I sat and watched it all, didn’t look at my phone once and absolutely loved it. It’s fun, sad, funny and … timeless. I really hope that it continues to find new audiences over and over with kids. Fantastic!

Available as download and on-demand from iTunes, Amazon and all major platforms.

Review by Tina from a disc kindly supplied by Aim Publicity from Second Sight Films.

I used to live in Los Angeles and write about Rock bands. Now I live in wonderful Wales and write about films. I like video games (especially RDR2) and am also a painter...gratuitous plug: follow my art account on Instagram @artbytinar
Thoughts on Fallout Review: Astro Bot Rescue Mission