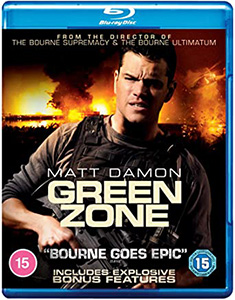 Based in 2003 American occupied Iraq, Green Zone is a military thriller written by Brian Helgeland and based on the 2006 book ‘Imperial Life in the Emerald City’ by journalist Rajiv Chandrasekaran, and  is directed by ‘Mr shaky cam’ Paul Greengrass.

Boy is this a blokes film, it’s so damn macho and action packed and ARMY that … yes as you can imagine, I don’t really like these sort of ‘army-american- modern day action’ films.

However, Green Zone is entertaining and did hold my attention, mainly because alongside all the macho army action stuff is a story that resonates and isn’t all out “YEAH America” it’s more “aren’t the American’s a load of double crossing shits”.

Matt Damon plays U.S. Army Chief Warrant Officer Roy Miller, who with his troop are looking for Iraq weapons of mass destruction, but whenever they turn up there are NO WMD’s.

Much double crossing ensues along with some great chase scenes and yes, macho action

I used to live in Los Angeles and write about Rock bands. Now I live in wonderful Wales and write about films. I like video games (especially RDR2) and am also a painter...gratuitous plug: follow my art account on Instagram @artbytinar
Review: Monkey – The Complete Series Review: Green Street