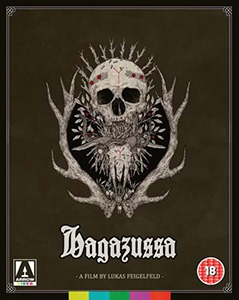 Hagazussa: A Heathen’s Curse (Hagazussa, an Old German term for Witch) is the directoral debut of Lukas Feigelfeld . The story takes place in medieval Germany/alps and tells the story Albrun (Aleksandra Cwen), a goat-herder who is ostracised by the villagers because they think she’s a witch.

On reading the several 5 star reviews for this film, I thought we at 60MW Towers were in for a trippy, unhinged, possibly psychologically heavy story of a young girl falsely accused of witchcraft in the 15th century. I was prepared for a flight of fancy, a dark fairytale of persecution and misdirection.

However, that is not the case.

I do believe that a lot of reviewers tend to go with the herd, and if a few popular critics heap praise on a movie, then to go against the grain is a risk. I mean, what if you’re wrong, and they’re right? I tend to (as you probably already know) say exactly what I think of a film.

Hagazussa is a sumptuous feast for the eyes. Its beautiful alpine landscapes are unchanged and take you to the dark ages. The filth, hovels, and goats are believable, as is the acting. Cwen giving a nuanced performance of wide eyed innocence descending into her own terror.

The sound design is breathtaking. Creaks and squeaks, whispers assault you from every corner of the room, and the soundtrack (included here in this special edition) is perfection; throbbing, ancient and malevolent.

My problem is the story. Or rather, non-story. The one critisim I’ve read of the film is that it’s very slow paced. I don’t think it is. Or that the comparison to the The Witch is too great. The only thing it shares with that (superior) film is lighting and costume.

This is a surreal, sexualised tale of persecution of a woman, or perhaps anyone who’s a bit different. Yes, a reflection of what really happened to ‘witches’, and there are glimpses of what might have been if the writer/director hadn’t been so up his own arse about it. Just giving a little bit of ‘stable’ narrative would have made this an enjoyable film to watch instead of a ‘why is that happening’.

We’ve all seen films that make you think you’re dreaming (anything with Nic Cage in), and this is like that, but it’s annoying in its misinformation. Is it just Albrun’s psychosis? Is any of it really happening?

It also has a few shockers in it, which although I think were NOT done for shock value (a mother abusing her daughter, rape, demonic sex – Or a very active masturbatory session, Albrun cooking and eating her drowned baby), I didn’t care. I got to a point where I stopped wondering if we were seeing Albrun’s bad trip from eating mushrooms or a woman having a psychotic breakdown. I heaved a sigh of relief when she spontaneously combusted at the end of the film.

So, lovely to look at, but a difficult watch. It didn’t flow over me like a lot of ‘dreamy’ narratives do, and I felt confused and let down.

Review by Tina from discs kindly supplied by Arrow Video via Fetch Publicity..

I used to live in Los Angeles and write about Rock bands. Now I live in wonderful Wales and write about films. I like video games (especially RDR2) and am also a painter...gratuitous plug: follow my art account on Instagram @artbytinar
Spotlight Reflection: Class of 1999 Review: The Shed