Review: He Came from the Swamp – The William Grefé Collection 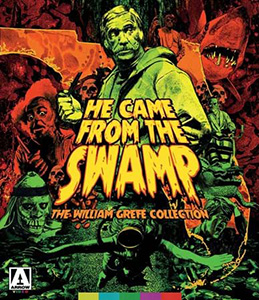 I’ve always been a fan of low budget independent filmmaking and my VHS/DVD/Blu-ray collection includes films by Edward D. Wood Jr, Herschell Gordon Lewis, and Doris Wishman (Nude on the Moon being a particular favourite of mine…go check it out), but for some reason the films of William Grefé had passed me by…until now.

Arrow Films have quite often put the spotlight on the more obscure side of cinema (just one of the many reasons why I love their releases), and they don’t come much more obscure than the films of William Grefé.

Through the 1960’s and 70’s he used the Florida swamps and surrounding areas as the backdrops to his low budget exploitation films, often using local people (and even passers by) with no acting experience to jump in front of the camera and act out what was in Grefé’s head that day…because a lot of the time he didn’t even have a script and it was just made up on the spot with who and what was available!

If your usual cinema fare is from the likes of Christopher Nolan and you find the works of , for example, Stuart Gordon too lowbrow for your cinematic tastes, then this collection of William Grefé’s Floridian exploits will surely lead to you reaching for the off button.

However, for everyone else for whom the seedier and lower budget end of cinema is a tasty treat for the eyes no matter how bad the acting/story/soundtrack/cinematography (delete as appropriate), then this collection of 7 of Grefé’s films will be an enticing morsel of cinema history, especially as this marks their first blu-ray release and are of course accompanied by the usual informative and entertaining special features that Arrow Films are known for.

Sting of Death and Death Curse of Tartu were released as a drive-in double bill, with Sting of Death being the most enjoyable of the 2. In fact, I’d put it as my favourite out of the whole collection…how can you not be entertained with Neil Sedaka singing “Do the Jellyfish” as a group of “teens” (I use that word in its loosest possible sense) dance around a pool before the films monster (wait until you see that in all its glory!) claims its next victim in the pool. Just don’t ask how nobody noticed it in there beforehand.

Death Curse of Tartu has a shapeshifting witch doctor defending his land and killing anyone that gets in his way, while The Hooked Generation and The Psychedelic Priest capture the late 60’s drug fuelled zeitgeist in an amalgam of scenes that don’t necessarily always make any coherent sense, but hey, a couple of hitchhikers were passing on the day they were filming, so why not put them in a scene where the female hitchhiker gives birth…fully clothed…and with no baby anywhere in sight after the “birth”.

The Naked Zoo has Rita Hayworth in one of her final onscreen appearances, and can be summed up with this one short synopsis: “wheelchair-bound husband seeks revenge on lusty wife“. Not a tag line you’ll see on many films these days!

Mako: Jaws of Death is another film that jumped onto the shark craze following the success of Jaws, and features some scenes that you definitely won’t see in any other of the other Jaws ripoff films…though Jaws 4 has a remarkably similar premise with its human/shark telepathic communication theme!

Finishing off this collection is Whiskey Mountain, where a gang of bikers go wild in the wilderness and generally are a pain in the backside to everyone.

One of the most interesting special features included in this set is a two-hour extended version of 2016’s They Came From The Swamp, a documentary featuring interviews with Grefé and cast/crew members telling stories of what it was like to be on location back in the 60’s with these films. It certainly was a wild time indeed!

All of the films are filled with plot holes so big it’s a wonder some of the “actors” didn’t fall down them and were never seen again. While a coherent narrative, Academy Award winning acting, seamless editing, believable special effects, etc are all things mostly absent across the board.

But, and it’s a big but…if low budget exploitation films get your heart racing with excitement, then get the beta blockers ready immediately, as this blu-ray showcase of Grefé’s films is the best you’re ever going to see them.

He Came from the Swamp is released 30th November 2020.