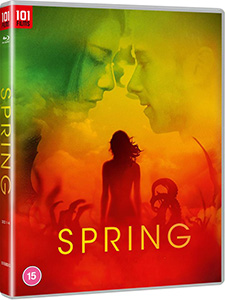 Directors Justin Benson and  Aaron Moorhead (previous collaborations include my previously reviewed The Endless) once again craft a beautiful looking, slow burning narrative that takes you to places (both figuratively and literally) that you weren’t expecting.

Evan (Lou Taylor Pucci) is a young man whose life is seemingly spiralling out of control and so decides to leave America and spend some time travelling alone. On a whim, he decides to go to Italy.

It is after befriending some loud English travellers and going for a drink with them at a local outdoor bar, that Evan sees Louise (Nadia Hilker) for the first time.

After approaching her at the bar he is instantly intrigued by her seemingly reckless and carefree attitude to meeting new people, and so begins a holiday relationship like no other.

Without giving too much away (for this is definitely one of those movies best enjoyed knowing as little as possible before watching), Spring is part fairy tale, part romance, part Lovecraftian horror story, part fantasy, and all playing out with the stunning Italian vistas as a backdrop to the proceedings.

Once again Benson and Moorhead are not afraid to let everything unravel at its own pace, with no rushing of character development and allowing the twisting storyline to play out at a languid pace that perfectly fits the hot summer Italian backdrop, while also dropping little verbal and visual hints that everything is not as it initially seems.

The special features add a whole new layer of appreciation to the project, especially the 2 commentary tracks which give you some very insightful background into how this was crafted.

Don’t watch Spring expecting it to be a horror movie, or romance, or sci-fi, it is all of those and more, an amalgam of ideas and visuals that stuck with me long after I’d turned off the TV.

If you’re in the mood for something a little different, then take a trip with Evan and let the events flow over you.