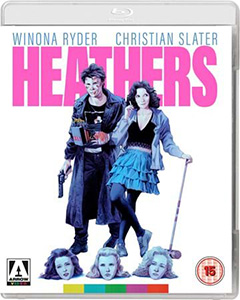 It’s no surprise that Daniel Waters was just 23 when he wrote the script for Heathers. It’s unlikely that anyone over the age of 25 would be able to produce such a time-relative, spikey, darkest black, tour de force of teen angst.

Film tends to reflect the time in which it’s made, and Heathers stands proud as a true product of the 80s. Arrow’s wonderful reissue tells the story of 17-year-old Veronica (Winona Ryder), part of a gang of ‘nasty girls’ (that’s popular to those of us who are less than perfect and without shoulder pads) whose names, 1, 2, and 3, are Heather. In-between bulimia and suicide jokes, Veronica falls in love with new boy JD (deliciously evil Christian Slater), a James Deanesque bad boy, leather jacketed and entitled boy who carries weapons to school.

Much has been made over the years about the dark tone of the film. Veronica self-harms with matches and with a car cigarette lighter (in one infamous scene JD lights a cigarette from her burning hand). Different men attempt to rape Veronica at different times (JD, a drunken frat boy, and a stupid high-school jock). I also remember reading that the whole film is an allegory for the American civil war (it’s all in the colours, red and blue). There’s forced oral sex, murder, suicide, and… a bomb.

At its heart is a subtle insurgence, a still valid hope that your gaze will go beyond the nasty girls and perhaps see that the Heather’s are far smarter than her vacuous than one’s “I shop therefore I am” sticker would indicate, after all one owns a copy of Harold Voth’s The Castrated Family and another Heather dies beside the Cliffs Notes for The Bell Jarand a magazine with the cover story ‘The Fall of the American Teen’.  Bit obvious? Yep, but in an age where mobile phones didn’t exist, you had to be.

This absolutely holds up, it is without a doubt a stone cold classic of cinema and has lost none of its punch. Winona Ryder has stated several times she’d love to make a sequel; can you IMAGINE how mobile phone hate would expand that world?

You can buy Heathers by clicking HERE. ALL money raised by purchasing from Amazon via our website is given back to our listeners and followers in upcoming competition prizes. The more people buy, the bigger our prizes.

Review by Tina (co-host 0f 60 Minutes With) from a disc kindly supplied via Aim Publicity from Arrow Films.

I used to live in Los Angeles and write about Rock bands. Now I live in wonderful Wales and write about films. I like video games (especially RDR2) and am also a painter...gratuitous plug: follow my art account on Instagram @artbytinar
Review: Razorback Review: D.O.A. A Right of Passage