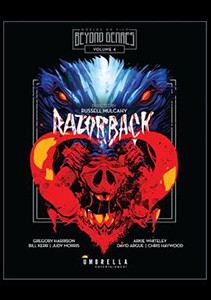 Once again Umbrella Entertainment release a fantastic title under their ‘Beyond Genres’ collection. This time it is the 1984 Australian classic Razorback.

When a child is killed by a rampaging boar (the titular ‘Razorback’), the Grandfather is accused of murder…because, who’s going to believe that an oversize boar is on a killing spree!?

When the Grandfather is acquitted due to lack of evidence, he vows to reap his revenge on the wild beast.

However, the perilous porker isn’t done with killing people yet and next attacks a visiting wildlife reporter (Beth; Judy Morris) and drags her out into the wilderness for a quick snack.

Beth’s husband Carl (Gregory Harrison) arrives in Australia to find out what has happened to her and comes across Benny and Dicko (Chris Haywood and David Argue), 2 ‘local boys’ who earlier attempted to rape Beth before the Razorback attacked.

And so begins Carl’s journey to find out what happened to his wife, discovering that Benny and Dicko and not the best of people to get friendly with, and trying to kill the beast that killed his wife.

While the thought that a ‘rampaging oversize pig’ may not be entirely believable, or indeed, threatening, under the superb direction of Russell Mulcahy the tension builds to nail-biting levels. Each off-screen snort of the boar eliciting goosebumps much like the first bars of John Williams score for Jaws did, both pre-empting imminent danger from a ravenous creature.

Imbued with an almost surreal colour palette which evokes Mulcahy’s earlier MTV video work with the likes of 80’s classic artists Duran Duran and Elton John, the onscreen action is often played out before a backdrop of bright blues, greens and reds, with silhouetted figures often used against these bright backlights, giving an otherworldly feel to the desolate Australian outback.

With a fantastic transfer which really heightens the beautiful cinematography, and the usual engrossing special features which are already a staple of these Beyond Genres releases, this Blu-ray is an essential buy not only for people who have already seen it via its previous releases, but also for anyone who has not yet had the joy of seeing a buff bacon butty getting its own back on humankind.