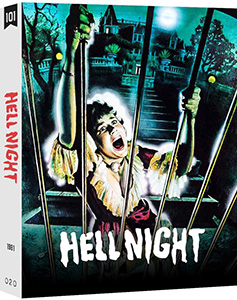 The 20th of 101 Films ‘Black Label’ series of releases, Hell Night is yet another superbly packaged and special features heavy addition to this great selection of titles (see here for them all).

A 4K scan of the best surviving archival 35mm film print with minor SD inserts to replace missing footage means that you get to see the story play out in the best possible quality.

And what a story it is!

I used to own Hell Night on ex-rental VHS back in the 80’s and hadn’t rewatched it in a very long time, so not only was it a treat to watch it on this crisp blu-ray transfer, it was also good to revisit a story that I had forgotten quite a bit about.

Marti (Linda Blair), Seth (Vincent Van Patten), Jeff (Peter Barton) and Denise (Suki Goodwin), are four fraternity pledges who must spend the night in Garth Manor: an old spooky mansion where 12 years ago to the night the previous resident murdered his entire family.

Peter (Kevin Brophy) is the fraternity head and has already booby trapped Garth Manor to scare the pledges during their time there. Little known to Peter though is that booby traps weren’t needed, as true evil still lurks there…as everyone is soon to discover.

Hell Night didn’t receive great reviews upon its release, but has since gone on to achieve a ‘cult status’ amongst a certain set of movie fans. I however have enjoyed it since first watching on VHS all those years ago, and my enjoyment has subsequently got higher thanks to this fantastic blu-ray release.

The hammy acting, the ridiculous dialogue, the kills, the music score, the costumes! All look and sound better than ever before.

Yes there is a lot of chat and long lulls in any action happening, but there is a certain charm to this movie that captivates me no matter what is happening on screen.

That may not be the case for those watching for the 1st time in 2021 and have had another 40 years of horror movies to digest, but give it a try nonetheless, especially when it is so well packaged and comes complete with a great commentary track and other special features, as well as a limited edition booklet.

Another worthy addition to 101 Films Black Label series of releases.

Review: Those Who Remain Review: ‘The Bird With the Crystal Plumage’ Limited Edition UHD