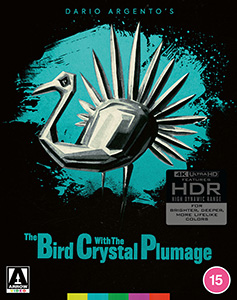 Dario Argento hit the screen with a bang (well, multiple stabs to be more precise) with his directorial debut The Bird With the Crystal Plumage. Setting the scene for his many giallo movies to follow, TBWTCP contains twists, turns, clues and red herrings aplenty as you you try to work out who is responsible for a series of murders.

American writer Sam Dalmas (Tony Musante) witnesses a brutal knife attack on a woman in a modern art gallery. Powerless to help her as she barely survives from a stabbing to the stomach, Sam becomes increasingly obsessed with the case and is tortured by the thought that he saw something significant that evening that he can now not bring to mind. Inspector Morosini (Enrico Maria Salerno) asks for his assistance, and against the better judgment of Sam’s girlfriend Julia (Suzy Kendall), Sam gets involved personally in the case and puts both himself and Julia on the hit list of the killer. Can the case be solved in time before they are both victims too?

TBWTCP is a beautifully crafted movie in both story and visuals. The narrative twists and turns leaving you convinced that you know the identity of the killer, before various subtle clues are hinted at which makes you doubt your judgement. All supported by luxurious cinematography by Vittorio Stovano and an epic score by legendary composer Ennio Morricone.

The violence, while shocking, is still just a precursor to the even more extreme blood spilling that will be in later Argento movies. However, I have always found the build up to the kills in Argento’s movies far more terrifying than the act itself, and TBWTCP is no exception. The killer toys with victims like a cat with a mouse, looking into their eyes and telling them exactly what is going to happen before the knife plunges into flesh, and then blood splatters across the walls and floors accompanied by a scream of both pain and submission.

TBWTCP is a stunning directorial debut that is a visual and aural pleasure, rewarding repeat viewings as you now look out for those subtle clues that you may well have missed upon first viewing.

It has also never looked or sounded as good as it does on this brand new 4K UHD release, with hitherto details that were lost in the darkness now being visible, as well as highlighting the use of colour that Argento is always so good with.

To give away too much of the plot would be to take away a huge amount of enjoyment if this would be your first viewing. Suffice it to say, one viewing of TBWTCP is never enough and this is an essential purchase for all Dario Argento fans, and a damn fine entry point if you are new to his movies.

This limited edition release also comes loaded with extras that flesh everything out in an interesting and informative way.