Review: Hold Back The Dawn 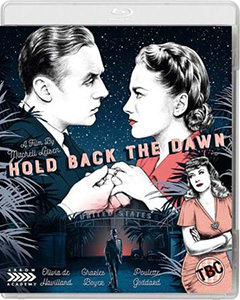 Back in 1941 when we were balls deep in WW2, America was making romantic dramas like Hold Back the Dawn, to alleviate the…you know…. guilt.

Told in flashback to a Hollywood producer (stay with me…), Charles Boyer is Georges Iscovescu, a Romanian gigolo who is trapped in Mexico waiting to get a visa to live in the USA. On meeting an old ‘Australian’ (huh?) girlfriend (Paulette Goddard) who married an American to stay put, he takes her advice not to wait for the normal 8 years (in between shagging her) and starts to look for an American lady to marry and abandon once he’s safe in ‘The good old US of A’.

He soon targets visiting school teacher Emmy Brown (a very virginal 25 yr old Oliviade Havilland), who is in Mexico on a day trip with her class of very naughty young boys.

Georges manages to wiggle his way in with her by being smouldering and foreign and by staring into her eyes with the promise of a guaranteed orgasm.

And here’s the thing about this film, it’s rather …’sexy’.

There are several mentions of pre-marital sex and at one point Goddard blatantly tells Boyer that no one ever made her ‘feel’ like he did. It’s quite steamy for post Hays code cinema, and I wonder how they got away with it.

The story and feel of the film reminded me of Douglas Sirk at his teary best, the three leads give truly wonderful performances and the extras are the usual array of top notch stuff from Arrow (especially the inclusion of Lux theatres play of the film).

I used to live in Los Angeles and write about Rock bands. Now I live in wonderful Wales and write about films. I like video games (especially RDR2) and am also a painter...gratuitous plug: follow my art account on Instagram @artbytinar
Review: FM July 2019 Decade of Decadence