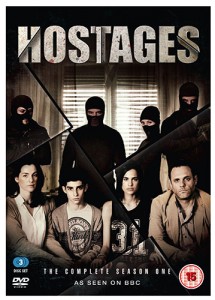 Doctor Yael Danon (the beautiful Ayelet Zurer) is a surgeon in a Tel Aviv hospital, when armed masked men break into her house and hold her husband (Jonah Lotan) and children hostage, she has moral choice to make; lose her family or kill the Israeli Prime Minister during an operation she must carry out.

‘Hostages‘ (AKA: Bnei Aruba) is a 10-part Israeli series made in 2013. Copied by ‘Hollywood’ last year, the American version; ‘Hostages‘ lost my interest around episode 5, however, this quite different version held my attention right till the end. The original series of ‘Hostages’ was a massive hit in its native Israel, and it’s unfamiliar setting really adds to the tension of the series.

As with all good thrillers, each character has a ‘secret’ (no spoilers!) and in this version the secrets are far more realistic and interesting than in the US version. As events and time pass, the kidnappers and hostages lives intermingle and they begin to form certain trusts and almost relationships.

It’s quite difficult to review a whole series without giving any spoilers away, so; for those who saw the US version, this original Hebrew series is FAR superior, not only in content, but also in the acting and dialogue. No lingering sighs from Toni Collette to a buff and perfect Dylan McDermott here, no, this is all about the story. And what a cracking story it is. I think I was very attracted by the fact that it’s an Israeli production, it made it so different from the normal fare. I was hooked. Great series, highly recommended, with a great ending, and I do love a good ending!

Review by Tina from discs kindly supplied by Arrow Films.

I used to live in Los Angeles and write about Rock bands. Now I live in wonderful Wales and write about films. I like video games (especially RDR2) and am also a painter...gratuitous plug: follow my art account on Instagram @artbytinar
Review: Rollerball February 2015 Entertainment Chat