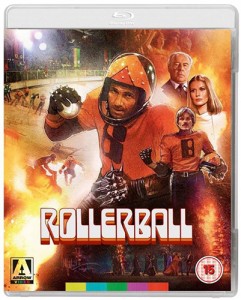 Set in the future, James Caan plays ‘man’s man’ Jonathan E; Captain of the Houston Rollerball team whose ruthless prowess in the game has made him famous worldwide. This idolation has attracted the discontent of the games’ corporate sponsors who want to suppress any displays of individualism fearing this could encourage some sort of revolution in the populace. With the powers-that-be pushing for his retirement, Jonathan is faced with a choice – concede to the Corporation’s will or take a stand by continuing to compete in the increasingly deadly games.

Arrow Films release another cracking classic; ‘Rollerball‘ was made in Munich to utilise some of the city’s ‘futuristic’ Olympic architecture with great effect. The picture and sound is magnificent as usual thanks to Arrow’s re-do of the original film. The set action pieces are quite frankly breath taking, especially when you consider steadycam wasn’t available then, and on watching the ‘making of’ it’s amazing no one died while they were filming. I could only describe this as a ‘thoughtful action film’. In no way do I mean it to sound namby pamby, although it’s anti-violence, it never shies away from a good maiming.

Although American made, this has a real ‘European’ feel to it and those who aren’t familiar with the story will be surprised to find out that this is the ORIGINAL dystopian movie. Before ‘The Running Man‘, before ‘The Hunger Games‘, and it’s so very relevant to today. It’s quite frightening really, as when this was made in 1975 and Apple was … just an apple. There was no corporate society, and as 300 years ago the British Government made Gin the drug to quell the masses, you wonder whether some sort of extra violent games will come into existence to keep us ‘calm’. Drug use is major part of the character’s lives, constantly pill popping some sort of Prozac calming floaty pills which dampen down all feeling, leaving the characters wildly happy, dopey, sex crazed, detached, uncaring. Trapped.

The star of course is Caan, who while being the embodiment of a manly man, gives a very subtle, restrained and considered performance, you know this is a dangerous man, but one who faced with a moral choice considers his future and takes action in an intelligent way. He’s always watching and waiting.

Another batch of outstanding special features, The new interview with Caan is excellent, I didn’t know he was a professional rodeo rider! The ‘making of’ is a great companion piece to the film and really goes in depth in an interesting way (but Arrow are never boring) about how it took 16 weeks for the actors to skate and they developed ‘styles’ almost by accident. They also made up the rules of Rollerball as they went along! Looking around the old sets is amazing. Knowing these buildings were made for the 74 Olympics, their futuristic look fitted perfectly. Two great commentaries; Jewison’s is a little dry to be honest, however Harrison’s is better.

I used to live in Los Angeles and write about Rock bands. Now I live in wonderful Wales and write about films. I like video games (especially RDR2) and am also a painter...gratuitous plug: follow my art account on Instagram @artbytinar
Interview with James Kottak Review: Hostages (Bnei Aruba)