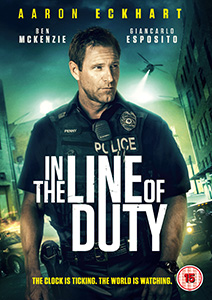 While out on a routine foot patrol, policeman Frank Penny (Aaron Eckhart) engages into a foot chase with a perp who is on the run.

Facing each other in a dead end alley, Frank is forced to shoot the criminal when he draws a gun on him. Unfortunately for Frank, the now dead criminal had abducted the daughter of the chief of police, and she is buried alive somewhere in a box that is slowly filling with water.

With little time left to find her before she drowns, Frank must try to redeem for his mistake by finding her location, all while being accompanied by a young wannabe online journalist who shadows his every move live streaming the events onto the internet.

In The Line Of Duty is a low budget action movie, the likes of which fill many shelves in DVD stores, and cover many pages on online streaming services. However, despite going into it with admittedly low expectations, by the time the end credits rolled, I found myself having really enjoyed it.

Yes there are plot holes so big that some of the characters were in danger of falling down them during one of the many foot chases, yes the young journalist following Frank (AND her colleague back at their base) is very annoying, and yes the visual effects are far from being the best you’ve ever seen seen, but despite all of that I really enjoyed watching it, and isn’t that the main reason we watch movies? For enjoyment?

The narrative rips along at a fair old pace with the next action set piece never too far away, interspersed with some hammy characterisation where Frank and the female live-streamer following him bond over the course of their short time together. Frank slowly warming to her motives and reasoning for doing what she is, while at the same time being annoyed that he has another person to protect while racing against the clock to try and save a young girls life.

With enjoyable action scenes, albeit with some some heavy handed social commentary, In The Line Of Duty may well not be to everyones taste, but if you have a penchant for the lower budget end of action movies, then this could well scratch that action movie itch for you.

Review by Dave from a streaming link kindly supplied by Signature Entertainment via Witchfinder PR.