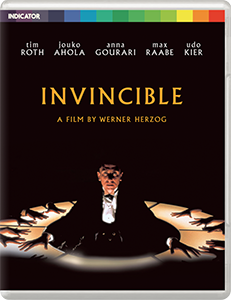 Written and directed by the inestimable Werner Herzog, Invincible is based on a true story and follows Jewish blacksmith Zishe Breitbart (Jouko Ahola) as he journeys to pre-WWII Berlin and becomes a strongman performing in a club owned by the mystical Herschel Steinschneider (Tim Roth).

It is here that Zishe is forced to take on the persona of ‘Siegfried’, complete with blonde wig and costume.

Unhappy at hiding that he is Jewish, Zishe ‘comes out’ onstage, much to the annoyance of Steinschneider and the German military in the audience.

The domino effect of this one act of defiance has irreversible consequences for all involved…not all of them positive.

Werner Herzog (as well as having the most wonderful voice) is a director that I’ve long admired, and no matter what the subject matter he has an innate ability to draw me into it and hold me there until the very end, as was once again the case with this movie that for some reason I’d never watched before!

Also holding my attention was Zishe Breitbart, whose innocent features are seemingly at odds with his large stature and inherent strength. This is not something just portrayed for the character either, he is 2 times winner of The World’s Strongest Man, as well as holding other titles too.

This innocent look helps you to empathise with the situations he finds himself in, while Tim Roth plays a character who initially you want to jeer like a pantomime bad guy, but who inevitably wins you over through a well acted scene in which his true story is revealed, before he too has to bring his journey to an end.

Invincible may not be the most well known Werner Herzog movie, but it is yet another not to be missed, especially when presented with such a crisp picture transfer and accompanied by some superb special features.

By the time the end credits have rolled I guarantee you’ll be online searching for more information about the story of of Zishe.