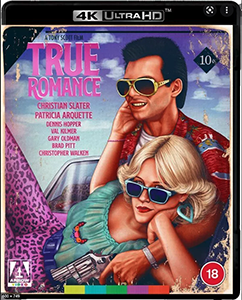 Written by Quentin Tarantino, directed by Tony Scott, and starring Christian Slater, Patricia Arquette, Dennis Hopper, Gary Oldman, Brad Pitt, Christopher Walken, Bronson Pinchot, Michael Rapaport, and a host of other actors at the top of their game (including Val Kilmer as Elvis Presley…if you haven’t watched this before, I shall say no more), True Romance has long been one of my all time favourite movies, and with this stunning 4K UHD release from Arrow Films, it is now surely the definitive version to own.

The narrative plays out like a fantasy love story crossed with a gangster/chase movie, all accompanied by a beautiful soundtrack which gives me goosebumps whenever I hear it.

Clarence Worley (Christian Slater) meets Alabama (Patricia Arquette) while he’s celebrating his birthday in the usual way…taking in some movies at the cinema, and it is here that a whirlwind “true romance” begins.

Through a series of highly entertaining, and often quite violent, series of events, Clarence and Alabama end up on the run with a suitcase full of drugs and drive from Detroit to Los Angeles in an attempt to sell them and fund a new life together in Cancun.

The owners of the drugs are naturally pissed off and pursue Clarence and Alabama, leaving a trail of destruction wherever they go. Which inevitably leads to a final bloody showdown.

True Romance may well be 2 hours long, but whenever I watch it (which has been many times over the years) it all goes by in a flash of awesome scene after awesome scene, then the end credits roll and I can’t wait to watch it again.

A couple of examples of scenes which will forever live in your movie memories are:

Gary Oldman as club owner/drug dealer Drexl in a verbal (and physical) battle with Clarence, which escalates from talking about “titties” on the TV, to a wince inducing finale.

You’ll also be enthralled by one of my all time favourite movie scenes, as Christopher Walken and Dennis Hopper sit quietly exchanging dialogue. The nuances of their performance have me transfixed every time I watch it, and it is a masterclass of acting. Pauses in the delivery of lines and minute changes in facial expressions, all combine to create a scene which has so much underlying tension that I still inadvertently find myself gripping the arms of the couch whenever I watch it.

Tony Scott adds his usual visual flair to every scene, giving even the bloodiest of them a beauty that you can’t help but admire, while even characters with very little screen time still stick in the memory…Brad Pitt, I’m looking at you…I still have to mention if we need “cleaning products” whenever in a supermarket!

This 4K transfer looks superb, keeping a layer of film grain but still giving fantastic definition of detail, all while giving the colours a new lease of life.

Included are the theatrical cut and directors cut (I always default to the directors cut), as well as a host of extras that will keep you entertained for a long time after the end credits have rolled.

Whether you’re a longtime fan or never seen it before (what a treat you have in store!), THIS is the release of True Romance that you need in your collection.