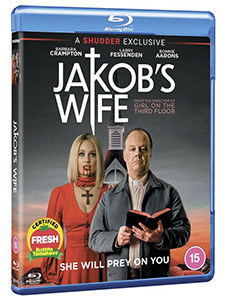 Anne (Barbara Crampton) is married to Jakob (Larry Fessenden); a minister in a small town, but after 30 years together she is feeling bored and wants some excitement back into her life.

Her life changes drastically though after a chance meeting with “The Master”, and after discovering bite marks on her neck, she suddenly feels more powerful, stronger, confident…and with an appetite for blood.

Vampire movies are constantly being released, yet hardly any of them stick in my mind like Near Dark, The Lost Boys, the Boris Karloff/Christoper Lee Dracula’s, or newer releases like Let the Right One In.

However, Jakob’s Wife had me under its vampiric spell from the very beginning and gave me a very enjoyable cinematic ride throughout all of its 98 minutes.

Central to my enjoyment is a wonderful performance by Barbara Crampton, who transforms from a meek ministers wife into a woman who knows exactly what she wants and nothing is going to stop her from getting it. While Larry Fessenden makes the perfect foil as her minister husband, obsessed with his work and paying scant attention to his wife…until the changes she undergoes are suddenly faced in the most abrupt (and hilarious) way in their kitchen.

A well crafted layer of comedy runs throughout the movie, balanced perfectly with some of the best practical gore effects I’ve seen in quite a while…I actually rewound one kill scene immediately as I was so impressed with the blood spurting!

It’s not just about the gore though, I felt empathy for Anne as she desperately tried to change her life for the better, while at the same time making it inextricably worse for all around her. Each character was portrayed well, with extra kudos to Bonnie Aarons bringing to life (undeath?) a vampiric master in what is almost always a male role.

It’s also very refreshing to see a horror movie not littered with teenage characters, and giving screen time to actors “of a certain age” who have honed their craft over many years and are damn good at what they do…something which I definitely enjoy watching as I get older myself.

Enjoyable, funny and blood splattered, Jakob’s Wife immediately goes into my list of vampire movies that I’ll keep rewatching. Buy it on any of the formats available when it’s released on 10th January and you can too.