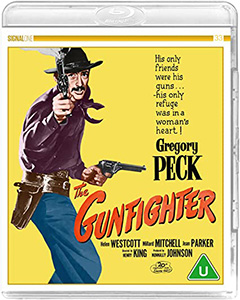 Jimmy Ringo (Gregory Peck) is a notorious gunfighter and widely known as the deadliest shot in the old west. This notoriety though brings with it a constant stream of gunslingers wanting bragging rights about being the one who finally managed to kill him.

While Jimmy wants an end to his days as a gunfighter, there are many who still want to beat him to the draw, including a young upstart whom Jimmy has to kill in self defence, leaving the dead boys 3 brothers declaring their revenge and following Jimmy to the town of Cayenne where he hopes to reunite with his estranged wife and young son.

This family reunion though is thrown into disarray by the initial disinterest of his wife, the local gunfighters hearing of Jimmy’s arrival, the 3 brothers in hot pursuit of him, and the towns marshal being an old partner of Jimmy when they were in a gang together.

Despite the title, there isn’t really a lot of gunfighting in the movie, this is a fantastic character driven western with top performances all around, especially from Gregory Peck as the tired gunfighter wanting to finally settle down, yet always hampered from doing so by the reputation that he has formed and the kudos given to anyone that could eventually take him down.

Everything is set against a ticking clock, whereby Jimmy only has so much time to make good with his wife and son ,then having to leave the town before the 3 brothers catch up with him. Various circumstances though mean that he is pushed into a race against time, and battles that he wanted to avoid.

An unforgettable finale with a short poignant speech by Millard Mitchell as Marshal Mark Stret rounds everything off in a perfect bittersweet ending.

An essential buy for anyone with the slightest interest in westerns and everyone who loves a good movie.

Review by Dave from a disc kindly supplied by Signal One Entertainment.