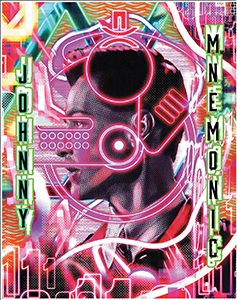 Number 25 in 101 Films “Black Label” range of releases (make sure to read my review of their previous Black Label release Snowtown), Johnny Mnemonic is a 1995 sci-fi/action movie set in the far flung future of 2021…which is scarily accurate at times, with citizens of Beijing all wearing face masks!

Keanu Reeves (fresh off the action hit Speed from the previous year) plays the titular Johnny Mnemonic; a data courier who transports computer data in an implanted memory chip in his brain.

His memory capacity is 80GB (a huge amount back when this was made), which he can double for a short time to 160GB. Unfortunately for Johnny his latest assignment tasks him with transporting 320GB of data, which he can only do for a very short time before it kills him.

Desperate for money to pay for a procedure to remove his memory chip and restore his childhood memories that had to be deleted to make room for it, Johnny accepts the data carrying gig, unaware that it carries the cure for Nerve Attenuation Syndrome (a condition that is affecting half the population of the world).

Pharmakom Industries, supported by Yakuza, tries to capture him to get the information back before it is leaked to everyone via the internet, and will do anything to stop him.

With just his courier skills to rely on, a physically enhanced bodyguard (Jane – Dina Meyer) and the help of a low-tech group led by J-Bone (Ice-T), who want to crack the code and give it freely to the people, Johnny has a ticking time bomb in his head that must be removed before it brings him to an untimely (and painful) end.

Johnny Mnemonic, despite being all about hi-tech futuristic goings-on has a distinctly low-tech (and low(ish) budget) look that very much reminded me of PM Entertainment movies of the 1990’s…which from me is a big compliment, as I bloody love those movies.

Never leaving the viewer bored, the narrative zips along from one crazy scene to another…with Dolph Lundgren as a street preacher being a particular favourite of mine whenever he appeared on screen, as well as Udo Kier playing yet another character who you just know you can’t trust, no matter what he says.

Johnny Mnemonic can’t compete with the big budget cgi filled movies of today, but it sure as hell gives a viewing experience that gets embedded into your brain as securely as the data that Johnny carries around with him. It’s fun, silly, and like a thrilling ride on a travelling local fair, you know there are better experiences out there, but this one was a lot of fun and well worth the price.

This limited edition package is well worth the price too. The hard outer slipcase is covered with eye-catching new artwork by Lucas Peverill that stands out on your movie shelves no matter where you put it, with the enclosed limited edition booklet featuring ‘Future Proof: A Cyberpunk 101’ by Rich Johnson and ‘The Semiotic Ghosts of William Gibson’ by Brian J. Robb. Both being a great read and accompanied by photos and imagery from the movie.

Inside the blu-ray case (which has a reversible cover…always a nice touch that is very much appreciated) are 6 art cards (postcard size) which are reproductions of Spanish lobby cards, and are very nice indeed…oh how I miss seeing lobby cards for each movie in my local cinema as I was growing up.

The special features on the disc are the icing on the cake, one of which is the longer Japanese director’s cut, which is a fantastic addition for fans of the movie.

An audio commentary by film critic Rich Johnson, Tomorrow Calling (1993), a short film adaptation of William Gibson’s short story The Gernsback Continuum, and interviews from the shoot are just a few of the other extra’s that will keep you informed and entertained on another great Black Label release from 101 Films.