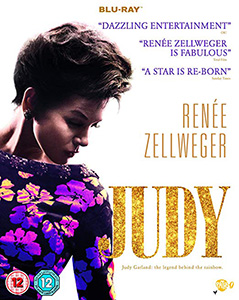 Fat (not fat), insanely talented and mother-controlled Frances Gumm had her name changed by the studio she was signed to as a nemesis to Shirley Temple.  Possessing a singing voice that soared and big brown eyes that could wring you dry, she was a gold mine for Louis B. Mayer.

Forced to takes pills for her weight (she wasn’t even chubby), pills to wake up, pills to go to sleep, pills and more pills, Judy was the all American girl, and coupled with Mickey Rooney they were America’s sweethearts.

Sadly director Rupert Goold only touches on Judy’s childhood and concentrates on the period  Judy spent performing at The Talk of the Town in London in 1969. I think it’s impossible to do justice to Judy Garland in a single 2 hour film, in her short life she reached the heights of success and the very depths of despair.

I’m a Judy fan and being a bit of an old school-film anorak I’m familiar with her life story and performances, and this is where Goold’s film shines. Renee Zellweger casting aside her Bridget Jones pants is all elbows and hump backed, twig legs tottering onstage, and while sounding somewhat similar to Judy when she sings, does not (thankfully) do an impersonation. Anyone else in this part would be a travesty, as Renee IS Judy. Sad, yet hopeful, scarred and brittle, brilliant and broken. She has had the very life sucked out of her, and so has Renee to a certain extent.

Sung live the musical numbers in the club are beguiling and thrilling – Will she go onstage? WILL she perform?  Off stage Renee makes Judy real, friendless and alone after a show she ends up going home with a couple, a bit  stereotypical as they’re gay men, but that IS what she’s famous for. Pain. Torment. Torch songs.

Judy is not a classic, but as Biopics go it is a good solid one with a truly exceptionally heartbreaking  performance from Renee.

I used to live in Los Angeles and write about Rock bands. Now I live in wonderful Wales and write about films. I like video games (especially RDR2) and am also a painter...gratuitous plug: follow my art account on Instagram @artbytinar
Review: Under the Shadow THUNDERMOTHER sign to AFM records