Review: Under the Shadow 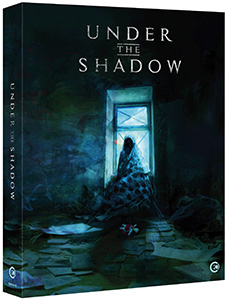 Great films normally reflect the time and occurrences of what’s going on at that time, and Under the Shadow is a perfect example of this.

It’s Tehran in the late 80’s and Shideh (Narges Rashidi) isn’t allowed to return to university to train as a doctor after the revolution because of her past political leanings and now stays home all day, looks after her daughter Dorsa (Avin Manshadi), and out of frustration does the Jane Fonda workout while watching her illegal video of it.

Her husband is a doctor and is called to the front leaving her alone with a small child who claims they are being haunted by a djinn.

Of course this isn’t so much about a haunting and evil imaginary forces, but rather the real evil at work in the middle east, war and the subjugation of women ( Shideh flees the  haunted house in the middle of the night without her hijab and is arrested. “The penalty is lashes,” warns an old woman handing her a hijab to cover her head, body and shame).

But this is so much more than social/gender commentary, the director Babak Anvari also delivers an outstanding slow-burn horror film with jump scares that will really make you bloody jump!

All spoken in Pharsi, and shot in Jordan and Qatar, our heroine is repeatedly tormented by accusations she’s an unfit mother, woman and doesn’t deserve to be educated. And in truth Shideh’s sometimes harsh treatment of her ultra-cute and terrified daughter Dorsa can make her rather unlikeable.

This really is a great film, the social commentary is just one layer, as the terror creeps in slowly, as things go wrong or go missing. Figures are glimpsed in doorways, and mute boys whisper warnings in the middle of all out terrifying war.

It even leaves the story open for a part 2 which would be fantastic.

Under the Shadow is released on 10th February 2020.

I used to live in Los Angeles and write about Rock bands. Now I live in wonderful Wales and write about films. I like video games (especially RDR2) and am also a painter...gratuitous plug: follow my art account on Instagram @artbytinar
Two new featurettes available for 1917 – the UK’s number 1 film Review: Judy