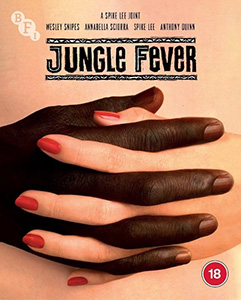 Jungle Fever directed and written by Spike Lee and released in 1991 is a tale of interracial romance and racism. Following several characters interconnecting threads, and set in early 90s New York, Flipper Purify (Wesley Snipes), is black, successful, happily married and lives in the ‘nice’ part of Harlem with his wife Drew (Lonette McKee), and daughter, Ming (Veronica Timbers). Despite Flipper being a talented architect he isn’t promoted and is discriminated against in a passive/aggressive way by his bosses.

After requesting an African-American secretary, his bosses hire Italian American Angie Tucci (Annabella Sciorra) which upsets Flipper. Angie lives with her father and two brothers, and is the ‘mother’ of the family. She has a quiet fiancé Paulie (John Turturro) who a small store filled with ‘salt of the earth’ New York men wasting time, and lives with his elderly father, Lou (Anthony Quinn).

Despite his happy marriage, Flipper and Angie embark on an affair. Flippers wife finds out and he moves into his parent’s home, where his crack head brother Gator (Samuel L Jackson) constantly visits to wheedle money off his mother.

This is very much a movie of its time, bright, pumping soundtrack by Stevie Wonder and full of stereotypical characters, acting just the way we expect them to in a story (when Angie’s father finds out she’s been fucking a black guy, he beats her with a belt). It’s also a stone cold Spike Lee film, his signature running all the way through it like blackpool rock.

It was an interesting watch 30 years later, because in its more overt ‘social commentary’ moments regarding racism and the way black people see white people, it seems that nothing has changed, and those stereotypes have remained unchanged despite being constantly challenged.

It has a ‘happy ever after’ sort of ending, all the different characters according to their social norms are placed back in the right box, with Angie and Flipper break up because of race, she returns to the family to cook for her ungrateful brothers and woman beating father, Flipper visits his estranged wife and has sex with her while she weeps, and nice Paulie gets beaten up for fancying a black woman, which is a shame as it would have been a better ending if Spike had mixed it up a bit instead of taking the easy route.

It does have a rather odd ending with Flipper leaving the family home to meet a young crack-addicted prostitute who propositions him, and calls him  ‘daddy’.  Flipper screams and it’s been suggested that this woman is his (now adult) daughter. But it smacks of ‘I don’t know how to end this film’ rather than a commentary on crack addiction.

I used to live in Los Angeles and write about Rock bands. Now I live in wonderful Wales and write about films. I like video games (especially RDR2) and am also a painter...gratuitous plug: follow my art account on Instagram @artbytinar
Review: Maeve Interview: Richard Sutton