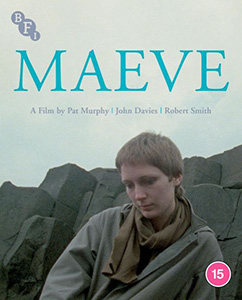 Pat Murphy’s first film was her most experimental. Set during the troubles in Ireland it tells the story of Catholic girl Maeve Sweeney (Mary Jackson), a young Belfast woman who lives in London and returns to the family home for a visit.

The film zips back and too though time and Maeve’s hairstyle changes as we see key moments throughout her life. The story is centered around conversations between Maeve and different characters with the odd soliloquy by her father Martin (Mark Mullholland).

It’s through these conversations we can identify with the central characters viewpoint; Maeve the feminist who left Ireland after being beaten by soldiers,  her sister, Roisin (Brid Brennan) who is destined to marry and have a ‘conventional’ life and her on/off boyfriend, Liam (John Keegan), a fervent Republican.

This is a very wordy ‘intelligent’ film much lauded by film critics. However I must admit it left me as cold as the dialogue in it. Having experienced the political situation in Northern Ireland myself as a child, the only character I recognised was Maeve’s sister and I only engaged with the film during its ‘lighter’ moments.

Mary Jackson plays Maeve like a stone, even during her more emotional scenes her acting is one dimensional (unlike Brid Brennan who gives a great impassioned performance). I also found the ‘naked sisters lounging around’ scenes titillating rather than empowering (I don’t know of any sisters who spend their evenings naked in each others company).

I did feel this was more of a ‘play for today’ that took itself VERY seriously and would have worked a lot better if the central character was a better actor.

I used to live in Los Angeles and write about Rock bands. Now I live in wonderful Wales and write about films. I like video games (especially RDR2) and am also a painter...gratuitous plug: follow my art account on Instagram @artbytinar
Ellis Mano Band release new single “The Question” featuring Lachy Doley Review: Jungle Fever