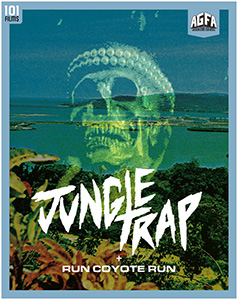 Another in 101 Films AGFA line of releases (make sure to read my reviews of Effects and Lady Street Fighter), Jungle Trap was originally shot in 1990 and lay unedited, unscored, and unseen for 26 years until the Bleeding Skull team edited it and recorded an original score using vintage synthesizers.

Jungle Trap is the final collaboration between writer/director James Bryan and writer/actress Renee Harmon (see the aforementioned Lady Street Fighter as an example of their previous work together), and is set in a jungle hotel that is haunted by the killer ghosts of the island natives.

The anthropologists who visit the island (more on that in a moment) looking for an artefact that has been missing for 30 years, soon realise that just getting away from the island alive is going to be more than enough for them to concentrate on.

Shot on video and with a budget that most modern films would use on a days photocopying, you know what to expect with these sort of movies…and this didn’t disappoint.

The flight in the small plane to the island is cinematic gold for me, beginning with the appearance of a drunk pilot whose acting is so hammy I’m surprised that his character name isn’t ‘Porky’.

This is swiftly followed by stock footage of the exterior of the plane in flight, intercut with shots inside the plane…and when I say “inside the plane”, a more accurate description would be “crammed inside a small cardboard construction with barely enough space for anyone to move”…I skipped back TWICE to appreciate that moment!

In fact, I skipped back many times watching this, including a car chase where the close ups of the drivers show that they are clearly in a car not moving and with people shaking them, and also to fully appreciate the emotions shown when one of the characters finds the beheaded corpse of a friend in the wardrobe.

If you’ve read my previous reviews of low budget movies like this, or heard me talk about them with Thom on our Decade of Decadence shows, then you’ll already know my appreciation for the lower end of cinema, and this ranks as another that will be put on rewatch rotation.

As an added bonus there is also Run Coyote Run as one of the special features; another James Bryan/Renee Harmon collaboration, that much like Revenge of Lady Street Fighter, combines footage from various sources to construct a movie that eschews any kind of narrative flow in favour of just “using whatever we have and throw it all together”. An experience not to be forgotten!

Also amongst the special features is a lively commentary track with director James Bryan, star Heidi Ahn, and the Bleeding Skull! team, all of whom not only give some great insight into the making of the movie back in 1990 and the construction of it 26 years later, but also give some very humorous stories along the way.

The cardboard slipcase almost made me think it was a lenticular cover at first glance and shows 1 of the 2 striking images you can use on the double sided sleeve on the blu-ray case…always nice to have a choice of sleeve to show.

A fun watch that no doubt will mature like a fine wine with every rewatch, Jungle Trap is yet another AGFA release from 101 Films to add to your collection ASAP…forget flowers, chocolates and all the other clichéd Valentines Day gifts, this is what to buy your loved one today.