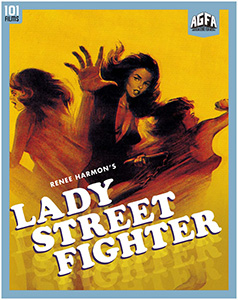 Another in 101 Films AGFA line of releases (read my review of Effects here), Lady Street Fighter is an absolute “must watch” for fans of wild and wacky low budget cinema.

Linda Allen (Renee Harmon) travels to Los Angeles to seek the mob gang who tortured and killed her sister. Meanwhile, the bad guys are on the hunt for an audio tape that incriminates them…and much like in my review of Effects, that’s all you need to know as far as the narrative goes.

I put this in such high regard as the likes of Samurai Cop, Hard Ticket to Hawaii and Miami Connection. Watch as Renee Harmon chats with someone in a scene, all the while “thinking” that she is stirring her drink with a piece of celery, but has actually missed the glass completely. Gasp in awe at the interview process of an escort agency. Have a shot of your favourite booze every time boobs appear on screen…and be prepared for a major hangover. This is trash cinema gold…even Tina gave it a full 5 stars on Letterboxd!

This is yet another of those “how the hell did this pass me by” movies, but thanks to this awesome blu-ray release from 101 Films, I can now enjoy it again and again, complete with great special features…including a sequel that’s not entirely a sequel! Buy, watch, and find out for yourself.

As was the case with Effects, mainstream cinema fans may not take to its low budget attractions, but if you’re a fan of the type of movies myself and Thom regularly chat about on our Decade of Decadence shows, then this will put a huge smile on your face all the way through its high kicking 73 minute running time.