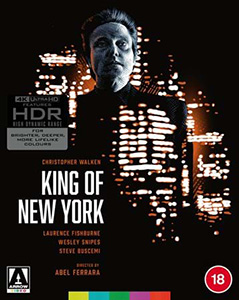 It tells the tale of Frank White (Christopher Walken) a drug lord, recently released from what appears to be a long stretch in prison into the arms of his crew. Boasting the most incredible 90s cast (Walken, David Caruso, Laurence Fishburne, Wesley Snipes, Giancarlo Esposito, Janet Julian, Joey Chin) and a soundtrack that is pure 90s hiphoppityhop club music (am I black enough for you?). Its long been one of those ‘Oh yeah I’ve heard of it, but never SEEN it’ sort of films.

Well good news, Arrow Films have released the most glorious 4K edition of this true classic of cinema.

Forget the plot, it’s a crime story with a twist. Bad guy wants to use his drug money to ‘do good’ while blowing away the competition. But this is an Abel Ferrara film. No? okay – a list of films you must now go and watch by him  Ms 45 – Fear City –Bad Lieutenant  ahh yes! Now you know!  Okay I’ll finish with The Addiction.

King of New York is as amped up as Harvey Keitel on coke shooting his car radio, the gangsters are larger than life and day glowingly violent. But the heart of the film is Walken, and although he always gives the goods, THIS is his pièce de résistance. Always other worldly, here he is angelic yet oppressively menacing, his large eyes unblinking, sexy yet horrific. No one else could play Frank White and he elevates this movie from solid thriller to unmissable classic.

The other star of this film is New York itself, my god this film is beautiful to look at and the new 4K restoration zings off the TV in muted primary colours, the lights of Times Square are eternal and it plonks you firmly in this other world of 30 years ago, the fashion, the music, and the sights.

The sound is crisp and crystal clear, the ‘jive’ language, guns cracking, the loud club music, it places you right there, even Walken’s skin has a palpable translucent sheen.

As usual Arrow give good extras, the interview with Ferrara about the making of the film is great as is the feature length French made film (I did wonder if he was drunk for some of it, but no, it’s his personality). The really great extras are the two commentaries, which are chock full of gossipy (my fave) details about the film. The multi person  commentary is also really funny.

A must buy for any film fan.

I used to live in Los Angeles and write about Rock bands. Now I live in wonderful Wales and write about films. I like video games (especially RDR2) and am also a painter...gratuitous plug: follow my art account on Instagram @artbytinar
Review: Silent Running JOEL HOEKSTRA’S 13 : ‘Running Games’ – new album out 12.02.21 (Frontiers)

BIG thanks to @Seanakin for sending us our 1st world tour photo from Tennessee. Let's get more pins on there: 60minuteswith.co.uk/world-tou… pic.twitter.com/IfJ9C1A7iw

Review on our website soon. Spolier.... it's great 👍🏻 twitter.com/ArrowFilmsVide…

RT @BFI We invite you to dance... at midday tomorrow as we reveal our Oct-Dec slate of BFI Blu-ray releases #BFIShop pic.twitter.com/CxYYSMAotQ