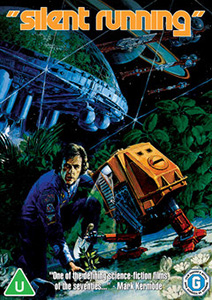 A favourite from watching on TV as a kid, Silent Running follows botanist Freeman Lowell (Bruce Dern) as he lovingly tends to the only botanical specimens left from Earth, all based under the huge geodesic domes on the spaceship ‘Valley Forge’.

When orders are received to destroy the project and return home, his fellow crew mates are elated at the thought of the current 8 year mission coming to an end. Freeman however is not so happy and hijacks the spaceship in an attempt to save his beloved nature project.

With the help of Huey and Dewey (2 of the ships worker drones), Freeman’s plans begin to spiral out of control, leading to an unavoidable conclusion.

I’ve always found watching Silent Running an almost zen-like experience, due mostly to the performance by Bruce Dern who exudes a relaxed aura akin to Bob Ross in space (now that would have been a TV show!). Add to that the charm of the ships drones and the calm inside the geodesic domes, and it all makes for a relaxing 90 minutes viewing, despite the odd moments of action, which mostly involve Freeman’s fellow crew members who have little regard for the precious cargo that they are responsible for.

The directorial debut of Douglas Trumbull, it is a damn shame that his future output as a director was mostly limited to short films. I’d have loved to have seen many more features from him.

A sedate sci-fi film which contains messages about nature conservation and the role of technology in human lives that is even more relevant today than it was back in 1972, Silent Running is a film that I never tire of watching. If you haven’t seen it yet, then give it a go and you might just think the same.

BIG thanks to @Seanakin for sending us our 1st world tour photo from Tennessee. Let's get more pins on there: 60minuteswith.co.uk/world-tou… pic.twitter.com/IfJ9C1A7iw

Review on our website soon. Spolier.... it's great 👍🏻 twitter.com/ArrowFilmsVide…

RT @BFI We invite you to dance... at midday tomorrow as we reveal our Oct-Dec slate of BFI Blu-ray releases #BFIShop pic.twitter.com/CxYYSMAotQ