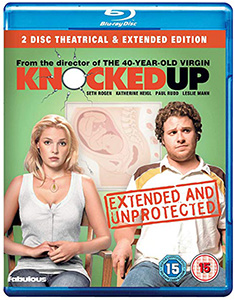 Knocked Up is a comedy from Judd Apatow about the trials and tribulations of unplanned pregnancy. After a one-night stand, Full-time stoner Ben Stone (Seth Rogen) and go-getting career woman Allison Scott (Katherine Heigl) end up with more than just an awkward shag. Scott becomes pregnant and decides to keep it, forcing the odd couple to drastically shift their lives around this new budding life.

I think out of all Judd Apatow produced/directed films (except for Superbad), this one stands as my favourite. Apatow’s and Rogan’s films have garnered, very fairly so, a wholly immature image. An immaturity constantly crossing the line into obnoxious. Yet, while I think the immaturity is still present and in full view in Knocked Up, it proves to be a necessary piece to the film as a whole.

Knocked Up is a film about immaturity. It’s about being forced to grow up after procrastinating the prospect for as long as you possibly can. As much as I hate to admit, it actually proves very relatable. Ben is a caricature of the 20 something man-child trying to hold as small a place in the world as he can, getting by on the friendship of his stoner friends. He is still a child himself, suddenly faced with his own impending maturity.

The cast of characters is quite good, each side character having recognisable and believable quirks. It’s still the usual motley crew of boisterous guys and uptight women but there is something about the chemistry between the cast that I think was caught really well. This is even more to the films credit when considering how many characters there are.

If you don’t enjoy the Apatow take on comedy however, this isn’t going to convert you. It’s less of ‘event’ humour of set-ups and punchlines and more of a series of dry one-liners chained into the dialogue, so if that’s less of your thing maybe give this a miss.

Knocked Up holds a special place in my heart. It has some of the most heart, wit and chemistry of any of the Apatow/Rogan films and definitely one I can recommend if you dig this kind of comedy.

I like to think I'm a critic out of spite for all the criticism I receive in film school. I enjoy consuming all things entertainment and art but I enjoy pretending I could do any better even more. Jokes aside, I absolutely adore creating and interacting with all art and entertainment. Always happy to air my obnoxious opinions on games, films and music and I can only hope you also get some kind of sick kick out of reading them.
Review: BLOODY TERROR: The Shocking Cinema of Norman J Warren, 1976-1987 Review: Funny People