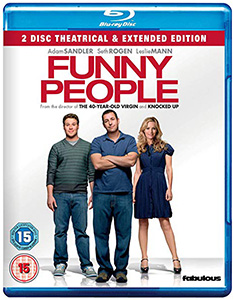 Out of the recent Judd Apatow load Dave provided for me to review, Funny People was the one I was both most dreading yet most excited to revisit. Back when I was 14 Tarantino’s hyper violent, Nazi killing epic, Inglorious Basterds was released. Like any other spotty teenager with bad hygiene who’s only seen about 3 films (all of which being other Tarantino films) this release was a huge event for me and my friends. I should stress the fact that me and my friends were very noticeably 14 and were not going to be served tickets to a Tarantino film. As the release drew closer and closer, we devised this plan to buy the ticket for some other film and casually walk into the screen showing Basterds. Obviously, this didn’t work as they had ticket collectors outside of the screen and instead we were forced to go watch the film we had bought our tickets for; Funny People. As you may imagine, I wasn’t exactly ecstatic about being denied my Nazi Killing romp and forced to watch an Adam Sandler film.

I was actually semi-excited to re-watch this as an adult. The film was released to fairly decent critical appraisal. Maybe I’d think more positively about the feature sans the shit-tinted glasses. The answer to this question was a resounding ‘kind of’.

Adam Sandler plays George Simmons, a middle-aged stand-up comedian turned actor who has jut been diagnosed with leukaemia. In wake of his diagnosis, and years of starring in critically panned schlock, he decides to reflect on his life and career while mentoring another young comedian, Ira (played by Seth Rogen). The best thing about this plot is the scathing examination of Adam Sandler, and comedians like him, it provides. There are moments in this film that feel like it could be a biopic directly about someone like Sandler. The casting is so fantastic, and Sandler’s performance so honest, it’s hard to not get depressed at its depiction of the death of an artist and comedian. It’s a plot set up made even more even more enthralling by the direction the film takes.

The dialogue and overall writing prove to be effective as well. To echo a point Ebert made in his review, the film feels real. It’s a film that showcases real people handling fame, failure, success and their own mortality. The jokes don’t feel like big scripted events; they feel like throw away gags that elicit the chuckles we share in the everyday jokes we tell among friends and it’s better that way. Funny People is not a comedy. It’s a drama about people who just so happen to be funny.

Despite the effectiveness however, I can’t bring myself to say this film is exactly a favourite. Maybe it’s my fore-mentioned nostalgia but it’s just not a film that sits well with me. At 2 and a half hours it’s excruciatingly paced, dragging heavily towards the end of the 2nd act. There comes a point where every message and theme has been explored to the fullest but it insists on meandering on a less interesting set of ideas and scenarios but perhaps I’m just nit-picking. Funny People is really quite brilliant for what it does and the fact it was even made and exists is astounding. It’s just a film I, personally, enjoy far more in hindsight rather than while actually watching.

Funny People is an odd little film, made even odder by the fact that it kind of works. Putting this many comedians, known for their silly and irreverent careers, forced to dissect themselves and one of their greats, ceremonially slicing open his chest and forcing us to observe his innards. It’s blunt, interesting and unlike most films. Yet, despite everything this film does differently or right, it is still as divisive now as it was at release. While interesting and effective to a point, Funny People is still a Rogen/Apatow feature.

Just with less jokes, for 2 and a half hours and starring Adam Sandler.

I like to think I'm a critic out of spite for all the criticism I receive in film school. I enjoy consuming all things entertainment and art but I enjoy pretending I could do any better even more. Jokes aside, I absolutely adore creating and interacting with all art and entertainment. Always happy to air my obnoxious opinions on games, films and music and I can only hope you also get some kind of sick kick out of reading them.
Review: Knocked Up Review: Crime and Punishment