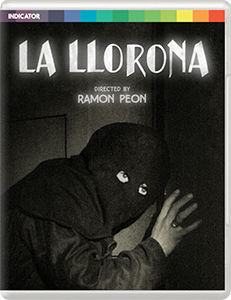 An early horror classic from Mexico, La Llorona is based on the folklore tale of “The Wailing Woman”, who kills both her child and herself before coming back to haunt the living.

Director Ramón Peón draws upon the influences of Universal Pictures horror movies of the time, but also creates his own unique and unsettling atmosphere for proceedings to play out, and while his ambitious visions don’t always show on screen exactly as he intended due to budgetary and technology restraints, these are mostly overcome by instilling a prevailing sense of unease while watching an interesting narrative unfold before you.

The pacing is slow and at times everything seems to drag a little bit, but the story, characters and atmosphere kept me invested throughout.

This 2K restoration from the only surviving film element looks great for a movie that is 89 years old, and the commentary track by genre-film experts, critics and authors Stephen Jones and Kim Newman added many more layers of enjoyment and appreciation of the movie.

The standout for me though across all of the special features was a piece to camera by Abraham Castillo Flores (head programmer of Mexico’s Mórbido Film Fest), whose knowledge and passion of the subject shone through the screen and had me transfixed. His informal yet informative delivery of the history of Mexican cinema had me wanting to know much more about it. I could listen to this guy all day.

Kudos to Powerhouse Films for releasing yet another enjoyable and enlightening movie that would otherwise have passed me by.

Soundcheck interview: Ronnie Atkins Review: The Phantom of the Monastery