Review: The Phantom of the Monastery 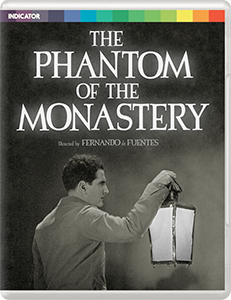 The perfect companion piece to the previously reviewed La Llorona, The Phantom of the Monastery is another early piece of Mexican horror cinema.

A group of hikers get lost and take shelter in a monastery, which unbeknown to them is haunted, but doors sealed shut by large wooden crucifixes, strange and unsettling shadows playing on the walls, and a cellar filled with coffins, soon enlighten them to the fact that all is not as first seemed.

Very “Twilight Zone” in the way the narrative plays out, it does however strongly keep its Mexican identity which puts it apart from Hollywood horror of the time.

Dripping with atmosphere, the location shooting not only added to the production value of the movie, but also helped to sell the unsettling events that play out there, be it a monk silently walking through the cold and claustrophobic monastery corridors, or a bat’s shadow mysteriously appearing on the crumbling walls.

Stephen Jones and Kim Newman contribute another fascinating commentary track, but once again it is Abraham Castillo Flores who had me glued to the screen with his insights into Mexican genre movies…more of this guy please!

Both this and the aforementioned La Llorona make for a great double bill of early examples of Mexican horror. Turn off the lights and enjoy.