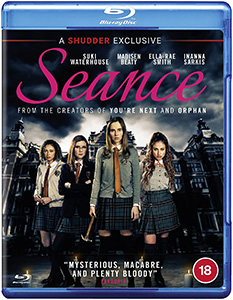 Camille Meadows (Suki Waterhouse) is the new girl at the prestigious Edelvine Academy for Girls, where a recent tragic event left one of the girls dead after falling from her bedroom window.

Edelvine already has a reputation for being haunted by the spirit of a previous girl who died there in the 1980s, and when a group of the students invite Camille to join them in a late night seance, it sets off a chain of events that leads to more unexplained and bloody deaths.

Seance is a slow burner horror/mystery, peppered with both the occasional jump scare and also scenes of impending doom, with dark shadowy corners and flashes of figures moving in the shadows.

The final 20 minutes also ramps up the blood spurting, with a couple of practical effects that had me smiling…especially so while watching some of the special features which shows both the pre-visualisation of the scene, and also how it didn’t go quite as planned when first filming it.

It’s another “teens in peril” situation that I must must admit to being slightly jaded with (probably because I’m an old git now), but all the actors do a great job and writer/director Simon Barrett crafts some genuinely creepy moments.

The sound design needs a special shoutout too, with good use of surround sound, and one particular moment having Tina verbally shout out due to what was coming from the rear speaker behind her.

The narrative twists and turns and it all comes together in a big exposition dump by one of the characters during the finale, which is satisfying in that it wraps everything up, but also left me feeling “so THAT’S why everyone died!?”.

A decent enough chiller for these long dark winter evenings.