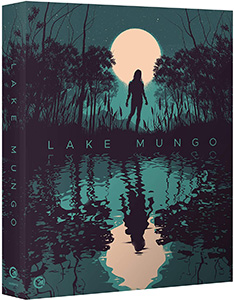 Sixteen year old Alice Palmer (Talia Zucker) drowns while swimming with her family on holiday in Australia. On their return home, strange things happen, leading the family to believe they’re being haunted by the ghost of Alice.

Alice’s  brother Mathew (Martin Sharp) sets up video cameras around the house to record Alice’s ghost. He later confesses they are fake. The family consult psychic Ray Kemeny for for help, but he is unable to explain what’s happening, he also hides the fact that Alice had seen him previously about her nightmares of drowning.

This 2008 film is often lauded for its atmospheric ‘haunting’ vibe. It’s filmed like a documentary, with talking heads describing what happened, of course with the obligitary ‘surprise’ ending.

Although I’ve seen Lake Mungo before I admit that a second viewing did nothing to make me like it. I find it stretched and laborious, and all rather pointless. However, it’s much loved by a lot of film fans but I don’t see the appeal. Nothing really happens in it, and the scares amount to a person standing in the background of mirrors and photos with no explanation, but I suppose that is the point, that there is no explanation, which I find boring. I’d rather watch ‘Don’t Look Now’.

On a brigher note this is one of Second Sights wonderful special edition films, with beautiful art work and it’s packed full of amazing extras that actually make up for the film.

Review by Tina from a disc kindly supplied by Second Sight Films.

I used to live in Los Angeles and write about Rock bands. Now I live in wonderful Wales and write about films. I like video games (especially RDR2) and am also a painter...gratuitous plug: follow my art account on Instagram @artbytinar
WILDSTREET release their new album III on June 25 Review: Shock Wave – Hong Kong Destruction