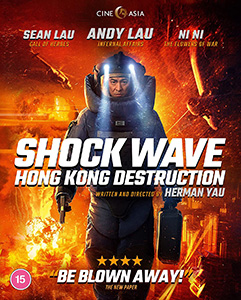 Shock Wave: Hong Kong Destruction (AKA: Shock Wave 2) is a Hong Kong based Chinese language action film which apparently is NOT a direct sequel, but is in fact a stand alone story featuring new characters but the same cast as number one. Written and directed by Herman Yau, and produced by and starring Andy Lau.

The story portrays Lau as a former bomb disposal officer who lost a leg in the line of duty.

It’s a very Chinese film, quick action, lots of shouting, overacting and some intense glowering into camera. Having said that, it’s a very entertaining 2 hours and even though you can guess who the bad guy is, I rather enjoyed it.

Review by Tina from a streaming link kindly supplied by CineAsia via The Warrior Agency.

I used to live in Los Angeles and write about Rock bands. Now I live in wonderful Wales and write about films. I like video games (especially RDR2) and am also a painter...gratuitous plug: follow my art account on Instagram @artbytinar
Review: Lake Mungo Review: Line of Duty (Series 6)