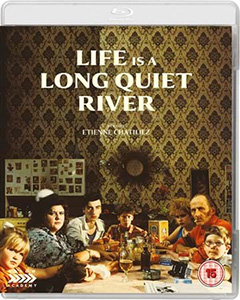 The bourgeois Le Quesnoys live a perfect life with their well behaved and immaculately dressed children, while the Groseilles who live in a less reputable part of town, have zero control over their rambunctious and impertinent kids.

However, both families have lived for 12 years not knowing that, due to a lovers squabble between 2 people at the hospital where their children were born, that they have each been bringing up one of the other families offspring as one of their own.

As the daughter who has lived a privileged life for 12 years, and the son who has had to fight for every small scrap for the same amount of time, suddenly have to come to terms that the family they have grown up with is not biologically their own, everyones lives are turned upside down as new relationships are formed…and strained.

Life Is a Long Quiet River is a biting satire on both the differences and similarities between families, no matter what “side of the tracks” you were brought up on, while also giving a nod to the “nature vs nurture” debate.

The immediate greed of the Groseilles (and their subsequent casual approach to the use of their new found wealth) is brilliantly balanced against the crashing despair of the Le Quesnoys, as the well structured lifestyle to which they had become accustomed begins to fall down around them.

There is no real definitive “end” to the movie, and it leaves you to your own thoughts on how the families lives continued after this bombshell had been dropped on them, but the laughs, tears, and uncomfortable conversations that happen before then, are all well performed and linger long in the memory.

An award winning French film with themes that translate into any language.