Review: Man of a Thousand Faces 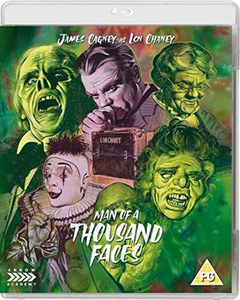 The problem with a lot of ‘true life’ stories in film is that they are invariably NOT true. My very cursory knowledge of Lon Chaney is that only the main points of this biopic are ‘real’. But it really doesn’t matter, mainly because the star of this film is the great James Cagney, who of course plays…James Cagney doing a bit of a Lon Chaney.

The story follows Chaney (James Cagney) who’s working in vaudeville with his wife Cleva (a decidedly glowing Dorothy Malone). Cleva announces that she is pregnant and pressures Lon to visit his parents who she has never met. This is because both Chaneys parents and deaf and can’t talk, and he knows his highly strung wife will freak out when she meets them. He’s right and on meeting them Cleva reacts with disgust and tells Lon she doesn’t want the baby in case he too is a deaf mute and she doesn’t want to be the mother of a ‘dumb thing’.

The child is born (he grows up to be Lon Chaney Jnr  –  The Wolfman) and can hear.

The film is more or less a Douglas Sirk-type melodrama, with affairs and wooden legs and all sorts of heart-wrenching turmoil. Cleava disappears after taking poison onstage (this really happened, though not onstage) and Lon has his young son taken off him by the court.

Again this is somewhat untrue as Chaney Jnr was removed but was placed in a boarding school. The films story does revolve around the placement of this child and I wondered how Chaney Jnr viewed this film and his father in real life.

The film ends with a dying Chaney Snr passing his makeup box to Chaney Jnr, when at the time Lon was married with 2 small children and working in a butchers to make ends meet.

However, leaving the true story aside, this is a very enjoyable film made so by a wonderful Cagney.

The talk by Kim Newman in the special features is very enjoyable, especially as it eschews the dry and academic viewpoint which so often makes me want to reach for the fast forward button in some extras. This is entertaining, informative, and delivered with passion by somebody who is obviously having a great time chatting about something he loves, rather than doing it as just a work assignment.

FIRST PRESSING ONLY: Fully Illustrated booklet with a newly commisioned essay by Vic Pratt of the BFI

Man of a Thousand Faces is released on 28th October 2019.

I used to live in Los Angeles and write about Rock bands. Now I live in wonderful Wales and write about films. I like video games (especially RDR2) and am also a painter...gratuitous plug: follow my art account on Instagram @artbytinar
Review: Worzel Gummidge Christmas Special Palace of the King release new single and video