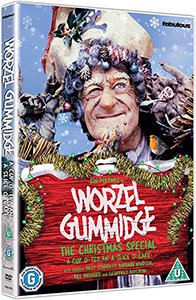 For those of you who may be unfamiliar with our titular hero, let me explain who Worzel Gummidge is.

He is a walking, talking scarecrow who has a variety of  interchangeable turnip, manglewurzel  (YES, Manglewurzle) and swede heads, each of which suited a particular occasion, like tea with the Queen or endowed him with a specific skill to evade going to prison.

He lives in ten acre field on Scatterbrook farm and was originally a character in Barbara Euphan Todd’s 1936 book Worzel Gummidge. Most importantly he is a VERY naughty scarecrow.

The books were adapted for TV in 1979 and are loosely based on the original stories. Worzel Gummidge stars former Doctor Who actor Jon Pertwee as Worzel, along with Una Stubbs as his stone cold bitch ‘girlfriend’ Aunt Sally (she should have won an Oscar), lovely bubbly Barbara Windsor as Saucy Nancy (who he should be with but he’s too obsessed with bitch Sally), Bogle McNeep (a cameo from Billy Connolly) and Geoffrey (Catweazle…and if you don’t know who HE is, go to YouTube immediately) Bayldon as the quite genuinely grouchy and scary Crowman.

Of course there has to be a few humans in there too so as not to terrify the kids too much…Charlotte Coleman (who sadly died after making Three Weddings and a Funeral) plays Sue, and Jeremy Austin is her brother John.

It seems that naughty Worzel is banned from the Crowman’s Christmas Ball, so he leaves, tramping across fields (and blaming John and Sue) to find Aunt Sally to ‘invite’ her to the ball.

Being the Christmas episode this has a few musical numbers in. “EWWW” I hear you say? Hmm, me too normally, but come on, you’d have to be mad not to enjoy seeing Babs Windsor dressed as a busty ships masthead jiggling along with some very gay sailors…or are they pirates? I’m not sure.

On the way he loses a sulking contest to Bogle and has his head pinched. Oh it all sounds very twee doesn’t it? But let me pique your interest. If you are unfamiliar with Worzel pause here, and take 2 minutes to YouTube him swopping his heads.

This is a kids programme that in another universe was made by David Lynch. Its subversive and disturbing, colourful, odd, and wonderful. The cast are splendid, Una Stubbs being a real horror while you feel genuine pangs of sympathy for her grandioseness. Pertwee so well known for Dr Who is a revelation of quirky, jerky, self-congratulatory arseholeness.

This is TV your kids NEED in their lives. I guarentee they won’t be terrified but rather, engrossed. And although it looks a little dated, the story and content is universal.

You know what’s really great? There is not one moping kid and NO mobile phones, no computers, NO PS4’s. Just fields, scary scarecrows and  pure joy.

I used to live in Los Angeles and write about Rock bands. Now I live in wonderful Wales and write about films. I like video games (especially RDR2) and am also a painter...gratuitous plug: follow my art account on Instagram @artbytinar
Amberian Dawn release new single & lyric video Review: Man of a Thousand Faces