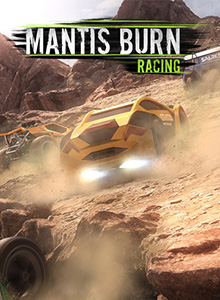 The Nintendo Switch has had an incredible year, making it one of the most sought after gaming systems of 2017. Not only does the console have some superb first party Nintendo titles, such as Super Mario Odyssey and The Legend of Zelda: Breath of the Wild, but the online eShop is now a thriving place featuring some excellent indie titles. In fact, there are now over 200 games available on the eShop, meaning there is plenty of choice for gamers. As if there weren’t enough reasons to own a Nintendo Switch, along speeds another with the release of Mantis Burn Racing!

I’ve been a fan of Mantis Burn Racing since I first played it at Eurogamer Expo (EGX) in 2016, and I knew it would be a day one purchase when it was released on console. Knowing the pedigree from developer VooFoo Studios, who also made the brilliant Pure Pool, I had a good feeling that the final game was going to be great, and I wasn’t wrong. I was very excited when I heard that Mantis Burn Racing was being released on Nintendo Switch and although I didn’t get to play it at EGX 2017, seeing it running in handheld mode was enough to convince me it was going to be good. Thinking about it, I now own Mantis Burn Racing on three consoles, but for my money, the Nintendo Switch version is the best out of the lot!

For anyone who doesn’t know, Mantis Burn Racing is a top down racing game, which reminds me of games like Super Cars 2, and Super Skidmarks. I sunk hours into those games when I was a kid, which probably explains why I love Mantis Burn Racing so much.

To have any success in Mantis Burn Racing, you need to become a master in the art of power sliding. Although this may sound tricky, you soon discover that Mantis Burn Racing is one of those rare games that are easy to pick up and hard to put down. There are a number of different cars to drive with the handling of each car feeling unique. There is a real sense of weight to the vehicles when drifting around corners which makes you feel totally in control. This can lead to moments of absolute triumph, especially when you hit the perfect slide around the final corner of a race to take first place.

As well as learning how to power slide, there is also a turbo boost which you can use to your advantage. Your turbo boost charges up throughout the race and you are rewarded for good driving such as power sliding, successfully drafting behind cars, or overtaking. Deciding when to deploy your turbo boost is another tactic that comes into play, and it soon becomes clear that there is a lot more to this game than you may expect.

Not only is Mantis Burn Racing a fantastic racing game, but there is also an extensive career mode with a huge amount of content that will keep you entertained for hours. You start as a rookie earning experience as you race. Win or lose, you are always earning experience, which makes the game feel like it is constantly rewarding you, in turn, giving you that ‘just one more go’ feeling.

As you progress through the game you earn money, which is used to purchase new vehicles. This goes hand in hand with the levelling system, as you cannot earn the right to drive your new cars until you’ve levelled up. There is also the opportunity to increase the performance of your car by adding additional speed, acceleration, grip, suspension and boost. These tweaks allow you to shape the car to perform how you want it to, which can mean the difference between first place or last.

To progress though the career mode and unlock new seasons, you must unlock cogs. This is achieved by completing different objectives throughout the race, such as coming first or beating a certain lap time. Again, there is always a sense of progression, because even though you may not earn as many cogs as are on offer, you earn some, which makes you want to try again and do better next time. There are a number of different race modes to keep you occupied, including standard racing, time trials, and knockout, where each car is eliminated after a lap.

The graphics throughout are excellent, and even when playing in handheld mode on the small screen, everything is very detailed and appears to ‘pop’ from the display. The game runs at a silky smooth 60 frames per second, which adds an extra level of clarity to the already gorgeous graphics, and in turn makes the races feel great to play.

One of the many benefits of Mantis Burn Racing on the Nintendo Switch over its competitors is the ability to play on your TV, or take the game anywhere with you in handheld mode. I’ve primarily played the game in handheld mode and found this is the best way for me to play. When you add to this the subtle amount of rumble feedback you receive from the Joy-Cons, playing in handheld mode makes me feel totally immersed and utterly focused on what I am doing.

Another advantage that the Switch has is local multiplayer and Mantis Burn Racing offers an excellent choice of options. You can take the game anywhere and play with a friend in split screen using table top mode, so both players can focus on their own portion of the screen. Alternatively you can prop up the screen using the kickstand at the back of the Switch, so you can both view the screen side by side. These options can be changed with the click of a button and it’s a very neat touch. There is also an online mode, local wireless mode, and weekly challenges available to keep you occupied. Another bonus is minimal loading times, meaning that you are only seconds away from the action.

The Nintendo Switch version also comes with all the downloadable content (DLC) which was previously released separately. This includes Elite Class’ DLC, ‘Battle Cars’ DLC and ‘Snowbound’ tracks, which really makes this the definitive version of the game. Dave reviewed the Battle Cars DLC which you can check out here.

Mantis Burn Racing was already a great game, but for me the Nintendo Switch version is the best yet! The game plays beautifully and looks utterly glorious in handheld mode, and for £14.99, you are receiving a massive amount of content that will keep you hooked for hours and hours. I really cannot recommend Mantis Burn Racing enough, and it is an essential purchase if you own a Nintendo Switch.

I love video games and movies as much as I love my children. However, I'd rather face off against the worst end of level boss, and watch the scariest horror movie than visit another soft play! Thanks for taking the time to visit the website and read this review. Please send any complaints to Dave and any money to me!
Soundcheck ’em out: Hell’s Addiction, American Glutton, Buster Shuffle Soundcheck: Motown Chartbusters Vol.3