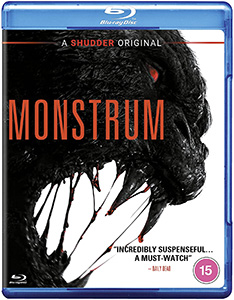 Directed by Heo Jong-ho, Monstrum is a 2018 Korean period action film starring Kim Myung-min, Kim In-kwon, Lee Hye-ri and Choi Woo-shik, set in 1527 where plague is spreading through the provence of Joseon caused by a mysterious creature called Monstrum. Anyone who comes into contact with it is covered in boils then is ripped apart by this unknown assailant.

The king recalls his once banished guard and side kick to find out what the hell is going on. Thing is, he was banished for saving a little girl from Monstrum and refusing to kill her. She’s now a grown woman, adept at chopsocky and also wants to be a doctor. Phew.

The friends tag along with a ragtag of villagers to investigate the killings and in the middle of several slayings and plague break outs they uncover a secret.

At heart this is an Evil vs Good story, and is very VERY silly, which makes it hugely enjoyable daft entertainment!

Monstrum is set for its UK Blu-ray debut and on digital on 4th October and on DVD 11th October from Acorn Media International in conjunction with Shudder.

I used to live in Los Angeles and write about Rock bands. Now I live in wonderful Wales and write about films. I like video games (especially RDR2) and am also a painter...gratuitous plug: follow my art account on Instagram @artbytinar
Histera: Fall of Human Review: Son