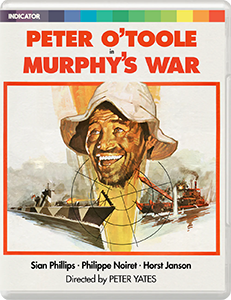 Set in South America, filmed in Malta and Venuzula, it tells the story of the last survivor of a UK WW2 Nazi torpedoed ship, who is intent on revenge after the German crew machine gun all the survivors in the water.

Injured Murphy is picked up nearly dead and taken to a missionary settlement on the Orinoco in Venezuela, where he is treated by a pacifist Quaker doctor, Dr Hayden (Siân Phillips).

On discovering this nazi U boat can travel up and down rivers and is in fact hiding upriver, he plans to sink it using a surviving Grumman J2F Duck floatplane.

In one long and hair raising scene Murphy teaches himself to fly this plane, finds the U boats hiding place and tries to bomb it using Molotov cocktails aided by new French friend Louis (Philippe Noiret).

All his attempts fail, but Murphy is relentless and will not give up until the bitter-sweet end.

Apparently this was a troubled film, with producer Michael Deeley regretting that he and Peter Yates turned down the chance to make The Godfather (1972) to make Murphy’s War.

Also O’Toole did all his own stunts, including swimming through water on fire with oil and with explosives going off! It wasn’t a success on release and is definitely one of those films you’d watch with your dad on a Sunday afternoon in 1979.

It’s worth watching just for O’Toole’s performance alone, you can forgive his terrible Oirish accent because he has a twinkle in his eye.

I used to live in Los Angeles and write about Rock bands. Now I live in wonderful Wales and write about films. I like video games (especially RDR2) and am also a painter...gratuitous plug: follow my art account on Instagram @artbytinar
(Remastered) Interview: Doro Review: The Razor’s Edge