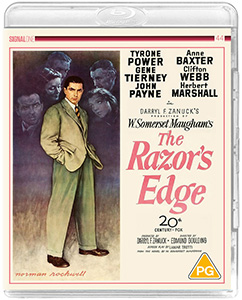 Based on W. Somerset Maugham’s novel of the same name, The Razor’s Edge stars all the big hitters from 1946: Tyrone Power, Gene Tierney, John Payne, Anne Baxter, Clifton Webb, and Herbert Marshall (who plays Maugham), with a bit part for Elsa Lanchester.

The Razor’s Edge tells the story of Larry Darrell (Power who in real life was a pilot in WW2), an American pilot traumatized by his experiences in World War I, now engaged to socialite Isabel Bradley (Tierney). She wants to marry, but insists that he first get a well paid job to keep her in the manner to which she is acustomed.

However Larry is in crisis, he needs to ‘find himself’ (yes really). The story is centered on Larry’s quest for fulfilment with his rejection of conventional life and search for a true and meaningful existence, he begins to thrive while his more materialistic friends suffer reversals of fortune.

Herbert Marshall appears as W. Somerset Maugham; the story’s narrator and drifts in and out of the lives of the other major players, showing how their lives have changed.

It’s a strange film insomuch that you’d expect it to be made in the 1970s about the Vietnam war rather than a year post WW2 about the effects of WW1 on a man. At one point Larry (after being rejected by Isabel for not taking life seriously) ends up with a swarmi in India (where he finds himself in the eyes of God).

As stories go this one is way ahead of its time, and although the film centres on Larry, equal narration is given to Isabel and the other main protagonist (Ann Baxter as) Sophie MacDonald.

After seeing Tyrone Power in the original Nightmare Alley, I’m a fan, and he’s fantastic in this, acting with real pathos making this rather unusual–for–its-time narrative about ‘feelings’ and where a man fits into the world after trauma, believable.

I used to live in Los Angeles and write about Rock bands. Now I live in wonderful Wales and write about films. I like video games (especially RDR2) and am also a painter...gratuitous plug: follow my art account on Instagram @artbytinar
Review: Murphy’s War Review: Rock ‘N’ Roll High School