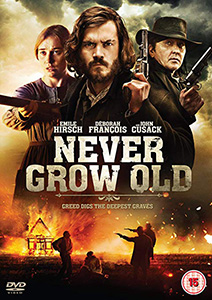 Patrick Tate (Emile Hirsch) is an Irish immigrant who has inadvertently settled in Oregon on his way to California with his French wife, Audrey (Deborah Francois), and their two young children. Patrick is the towns undertaker, and what was once a lucrative business in the ‘wild west’ has become few and far between since fire-and-brimstone preacher (Danny Webb) has banned whoring, gambling, and booze, the three things that guarantee a steady stream of dead men.

One dark night, Dutch Albert and his gang arrive in town, and after some cowboy wrong doings need the help of an undertaker.

At first Patrick does Dutch’s bidding, even putting up with his sidekick, mute psycho Dumb-Dumb (Sam Louwyck), who begins to take too much notice of Audrey.

It’s not your typical western-genre film insomuch as the bad guy is really evil, but having God stuffed down your throat and not being allowed to drink or have any ‘fleshly’ pleasures, sort of makes you side with him rather than the opinionated, ultra-religious  preacher.

Filmed in the director’s native Ireland, this has a gritty yet ethereal edge to it, reminding me of Pale Rider and Gwen, a vision of muddy hell. Are they all already dead? It is very unsettling.

Hirsch is excellent as the mild-mannered Patrick who is unwillingly forced to show his mettle, and Francois is only mildly annoying as the moany wife who won’t leave the town. But it’s Cusack, who after some right stinkers, reminds us what a fine actor he is. As Dutch he is quietly polite yet threatening, he knows he is bad, he knows he is capable of horror, but he remains calm yet ultimately sly and conniving. Villainy becomes John Cusack. Whispering and cajoling his victims he is unnerving.

Regular readers know that my favourite genre is the western, and this is a fine addition to the cannon.

I used to live in Los Angeles and write about Rock bands. Now I live in wonderful Wales and write about films. I like video games (especially RDR2) and am also a painter...gratuitous plug: follow my art account on Instagram @artbytinar
Review: The Major and the Minor Black Stone Cherry take on Son House’s ‘Death Letter Blues’