Review: The Major and the Minor 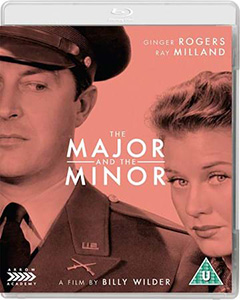 The Major and the Minor starring wonderful post-Astaire Ginger Rogers and extremely handsome Ray Milland, was Billy Wilder’s debut as a Hollywood director.

It’s your run of the mill, girl meets man, man is engaged to another woman, the woman is a self-centred, self-serving harpy, man realises he loves other girl…oh no its way more complicated than THAT dear reader.

Susan Applegate (Rogers) is fed up of being harassed by fat old rich men in her job as a professional scalp massager (a WHAT?) and wants to go back to Hicksville from the big city. Problem is, she hasn’t got enough money, so changes into pigtails and a school dress and poses as an 11 year old girl to go half price.

On the train she meets Major Philip Kirby (Milland). Her ‘disguise’ and her childlike manner of speaking convince him that she is a frightened child, and he lets her stay with him until they reach his stop. And again, chaos ensues.

This is quite an odd little film and shows just how much things have changed in the world we now live in. Miillands character, in order to protect Susan, takes her to the military academy he is stationed at and there she is passed about by around 20 post pubescent, unashamedly randy boys.

Considering Rogers was 31 when she made this, it makes for rather uncomfortable viewing. A woman posing as an 11 yr old, being pawed by 14 year old boys. Weird.

However. Way back in 1942 (the film itself was made in 1940) not only has it a subtle ‘America should join WW2’ vibe, it also repeatedly shows Rogers character getting unwanted fondles by most of the men in the film. Of course let’s not forget that paedophilia didn’t exist then so the storyline wouldn’t have caused any raised eyebrows.

Perhaps most surprising is the end of the film. I don’t think I’ve ever seen a film that wraps up as succinctly as this one, literally erasing all blots and queries with one…”I’m old enough to shag, kiss me”.

FIRST PRESSING ONLY: COLLECTOR’S BOOKLET WITH ESSAY BY RONALD BERGAN

I used to live in Los Angeles and write about Rock bands. Now I live in wonderful Wales and write about films. I like video games (especially RDR2) and am also a painter...gratuitous plug: follow my art account on Instagram @artbytinar
BAD NEWS DVD, albums and film screening Review: Never Grow Old