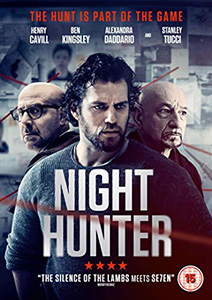 Cynical police Lieutenant ‘Marshall’ (Henry Cavill) is tracking a serial rapist and murderer, when during his investigations he crosses paths with the vigilante duo of Cooper (Ben Kingsley) and Lara (Eliana Jones), who have their own agenda for trying to capture the mysterious killer.

When the suspect is captured, the tip of a dark psychological iceberg is revealed, leaving its twisted underbelly to be explored by all involved. The repercussions of which leave a trail of more deaths on both sides of the law.

Written and directed by David Raymond, Night Hunter overcomes its lower budget restraints with solid performances from all the lead actors and with a narrative that twists and turns leaving you guessing as to the final outcome.

Brendan Fletcher is particularly watchable as a creepy and psychologically unhinged suspect who toys with the cops emotions, all the while giving a hint of latent calculated evil lying just below the surface.

Henry Cavill portrays his battle scarred and emotionally restrained character well, playing everything almost deadpan so as not to let any weakness show through showing love or kindness…though anger and frustration often quickly rise to the surface.

The action is minimal yet effective, and the pacing, while slow, drip feeds enough interesting scenes to keep you wondering what will happen next.

Night Hunter is a solid, if not exceptional, thriller where the narrative keeps you hooked and the characters are portrayed well enough that you actually care about them.

Review by Dave from a disc kindly supplied by Signature Entertainment.