Following on from Volume 1: Fear Warning, Volume 2: Criminal Intent, and Volume 3: Blood & Terror, it was once again an absolute pleasure to sit down with the latest Hammer Films boxset release from Powerhouse Films in their ‘Indicator’ series.

Volume 4 once again features 4 Hammer movies presented on Blu-ray for the 1st time in the UK. The movies are:

The Revenge of Frankenstein (1958) 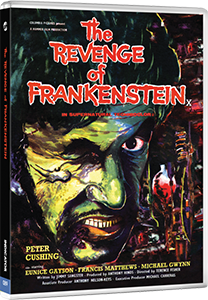 Escaping his inevitable demise by the guillotine at the end of The Curse of Frankenstein, Baron Victor Frankenstein (once again played Peter Cushing) escapes to Germany and assumes the identity of ‘Doctor Victor Stein’ (admittedly not the best pseudonym to choose when trying to keep your real identity a secret).

It is here that the powerful and insulated medical board refuse his application to join them. This decision is of course one which will backfire on them, and it does so in a huge way when Victor sets up his own medical business and becomes the most popular Doctor in the area.

His obsession with bringing the dead back to life though has not been quashed, and deep inside his living quarters is yet another ‘monster’ assembled from various body parts that he wants to give life to once again.

Things do not of course go to plan, and Victor soon finds himself in a position where man and ‘monster’ are inseparable.

The Revenge of Frankenstein is a worthy sequel to its predecessor, with Peter Cushing once again being completely mesmerising onscreen, with his body language and sublime use of props forwarding the narrative as much as the dialogue. 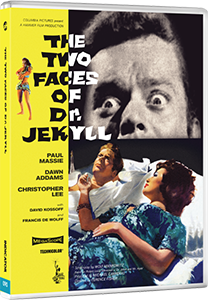 Giving a nice twist on the classic tale (as Hammer also did with Dr. Jekyll & Sister Hyde), Dr. Jekyll (Paul Massie) is a meek and pre-occupied man who spends most of his time in his laboratory, much to the chagrin of his frustrated wife Kitty (Dawn Addams).

When Dr. Jekyll suspects his wife of having feelings for the debonair Paul Allen (Christopher Lee), his experiments lead him to create a potion which transforms him into the suave and handsome ‘Edward Hyde’.

Under the identity Hyde, he befriends Allen and leads him into the dark world of London after dark, all while also seducing Kitty under his assumed identity.

Lust and revenge are never good bed fellows, and a happy ending for all is definitely not incoming.

The Two Faces of Dr. Jekyll has excellent sets, costumes and cinematography. All rounded off under the assured direction of Terence Fisher and with a performance by Christopher Lee that gives him the opportunity to smile and be an affable character for a change. 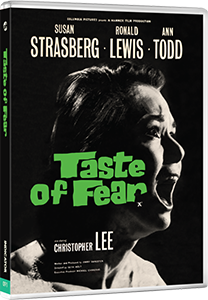 A young woman who has mysteriously drowned in lake is the opening sequence in this twisting narrative, that also throw red herrings and intertwining character interactions at you with surprising regularity.

Wheelchair bound Penny Appleby (Susan Strasberg) returns to her fathers home after living with her mother since her parents divorce many years ago.

She accepts her Father’s invitation to live there after the death of her mother, despite never being on good terms with her Father’s new wife.

It is when arriving at the house and being welcomed by her step-mother, that Penny is told her Father is away on business and return soon. This soon becomes a nightmare situation when Penny begins to see her Fathers dead body in various places around the house…or does she?

The comforting words and affections of Bob the chauffeur (Ronald Lewis) calm Penny, but she begins to suspect her step-mother and the family Doctor (Christopher Lee) of being in cahoots to try and be rid of her.

I’d surprisingly never seen Taste of Fear before, and was immediately wrapped in its enveloping storyline, guessing, and then second guessing myself, as to what may happen next and what truly was the truth with each character.

An ever-changing narrative which will have even cryptic crossword players scratching their heads on occasion to the correct conclusion. 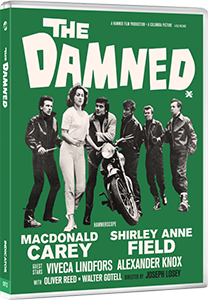 Another movie in this boxset which I’d never seen before!

The Damned begins like a 1960’s movie about youth gangs terrorising the everyday citizens of the seaside town of Weymouth.

However, this soon changes and takes on a far darker science fiction based storyline involving radioactive resistant children who have been specifically created to survive the inevitable nuclear war that will kill most of the population of earth. Now there’s a narrative curveball!

While seemingly being like 2 completely separate movies joined together to make a whole, it is the charismatic presence of Oliver Reid which ties everything together.

Reid plays ‘King’, the older brother of Joan (Shirley Anne Field), who is a young woman bored of the mundane life she is living and seeks adventure with Simon (Macdonald Carey), an older American visitor to Weymouth who is travelling on his sail boat.

King is overprotective of his sister and will go to any means to stop her flirtations with men…which inevitably leads to King, Penny and Simon discovering a secret that threatens their lives, and also the lives of many others around them.

Firmly embedded in 1960’s ideology, fashion and music, The Damned is an interesting step away from the Horror genre by Hammer, but one which still also delivers chills and surprises.

Once again this is yet another superb Indicator boxset, and one which should be on the shelves of any Hammer Films fan, and also any fan of cinema.

I eagerly await a Volume 5!

The special features in this boxset are incredible and will keep you enthralled for a very long time.

THE REVENGE OF FRANKENSTEIN

THE TWO FACES OF DR. JEKYLL

Limited edition box set of 6,000 numbered units.
Includes an exclusive double-sided poster only available with direct orders from the Powerhouse Films website (poster features the original UK Quad designs for THE REVENGE OF FRANKENSTEIN and THE TWO FACES OF DR. JEKYLL).

Review by Dave from discs kindly supplied by Powerhouse Films.