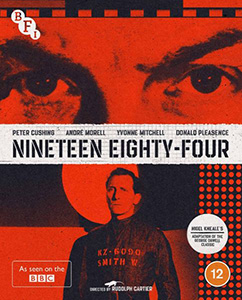 Adapted by Nigel Kneale from George Orwell’s dystopian masterpiece, this 1954 television drama has always been my favourite version to watch, especially now on this fantastic blu-ray release from the BFI.

Winston Smith (Peter Cushing) begins to question the information that his totalitarian government dictate to society on a regular basis, and through a series of meetings with people he begins to discover that there is far more to the world than he has been led to believe.

Unfortunately for Winston (and those whom he associates with), escaping the all seeing eyes that surround him is more difficult than he first imagined.

First broadcast in 1954 using a mixture of live studio pieces and some inserted pre-recorded location footage, 1984 is a landmark piece of television history that looks better than ever on this newly restored version by the BFI using original film materials from the BBC Archive and the BFI National Archive.

The pre-recorded sections are of course more pin-sharp than the low resolution live TV footage, but this just adds an extra layer of authenticity to it and a feeling of being back in 1954 watching this harrowing vision of the future. A future that can still be related to today, with certain sections of society blindly following and believing what they are told…these days by media outlets (including social media) whose control and influence often overshadows rational thought.

Peter Cushing is as magnificent as always, along with a cast that elicits empathy and disdain in equal measure, depending on what side of the societal fence you stand on (another similarity to all these years later).

Shocking and engrossing in equal measure, Nineteen Eighty-Four has lost none of its power or relevance.

Informative and entertaining special features add even more value to a disc that is well worth adding to your collection.